My name is Renee' McCain and this is mine and Lillie's blog.  At the beginning of this blog, I am 51 and Lillie is 11.5 years old.  She is a mid-size, overweight dog who is half Australian Shepherd and half Heeler.  Due to allergies, she's lost most of the fur on her tail and her nose.  Her eyesight isn't very good anymore and her hearing is almost gone.  She also has arthritis.  She has always been my soldier and is dependent and totally devoted to me.

After working the majority of my life at jobs I didn't like, starting my own companies on the side, not happy with any of it so doing all of it just to pay the bills....I decided to do something that I love.  I grew up traveling as my father worked offshore oilfield.  Once I  made enough money, I began taking my children on trips but then they were grown and now they are married.  I traveled to 9 countries overseas solo over the past 3 years.  Then, in October 2012, I was laid off.  I was relieved and my mind immediately shouted, "NOW you can travel!".

In November, I flew off to my favorite destination in the world, Italy, for 5 weeks of backpacking.  I wanted to stay so much longer but the friend who had looked after my old, insecure Lillie had her own life to get on with.  The thought of sitting in an office, doing something I was good at but didn't enjoy depressed me more than anything.  My head was anywhere but Here.  It was everywhere but Here.

So I sold and gave away most of my belongings, sold my Mustang convertible, rented out my condo fully furnished, and in July 2013, Lillie and I hit the road in the fully packed out used Jeep Grand Cherokee I had bought.  Lillie had no idea that it would be a while before we came "home" but she has since come to see the Jeep as Home. 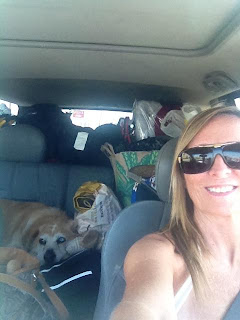