All of the States? 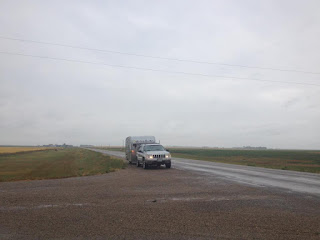 Like a Stephen King novel, when I arrived in my number 50 state (North Dakota), things got weird!  I saw the insane lightning that appeared to be striking land...buildings even!  I was driving my Jeep, pulling my aluminum Shasta behind and thinking, "Lord, PLEASE don't let lightning strike Shantilly!!".   Well, He heard me.  Then He sent wind.

Newly across the border from Minnesota (state number 49), I was amazed and blown away at the beautiful scenery of Hwy 2 and beyond in North Dakota.  I had no friends, relatives, or FB friends who had been to North Dakota (except for Devils Lake) so had NO idea of what to expect. I thought of the movie "Fargo" when I thought of ND!  Imagine my surprise (yes, it's near end of August) that I wanted to stop every 5 miles to take a picture!! 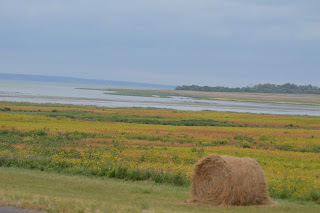 Well, Stephen King-ish stepped in and I'm wondering if that's because North Dakota is my number 50 state!?  I mean, this area hasn't had rain for 4 weeks.  I enter my final 50 and it's like a fire storm (crazy lightning, heavy rain, massive winds!!).  I didn't really have to drive through much heavy rain....it was mainly drizzle for hours...with crazy wind!!  THEN I realized how low my gas gauge was.

Shortly after leaving Devils Lake, I saw my last gas station!  I had over a half a tank so wasn't worried.  Oh...I should have been very worried!!  I never saw another one!!  So for the first time in my life, I ran out of gas.  The Lord saw to it that I was able to coast to a spot where I was off the highway and very near someone's home.  I filled my 1 gallon can and drove the 8 more miles to a gas station thanks to a generous man at that home! 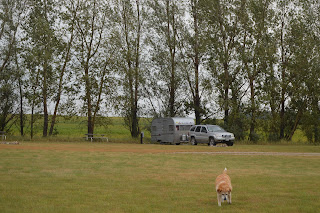 I've traveled the contiguous United States tent & RV camping over the past 2 years and have seen (as has Lillie) all of those 48 states.  I've NEVER driven into one where I had to deal with storms & I've never run out of gas!!  The campground I'm in is remote and I'm the only camper.  The wind is gusting at 45 mph...I feel like I'm in a Stephen King story!  I'm not quite sure what to make of my number 50 but I think Stephen King could have a hay day  with it!

It's supposed to be continued windy all day tomorrow but no rain.  I hope to get out to take some pictures in the area then see Devils Lake in the forecasted sunny Monday!  For now, I'll sip my cocktail, listen to the swell of the wind before it rocks Shantilly, and find some good dance music!!