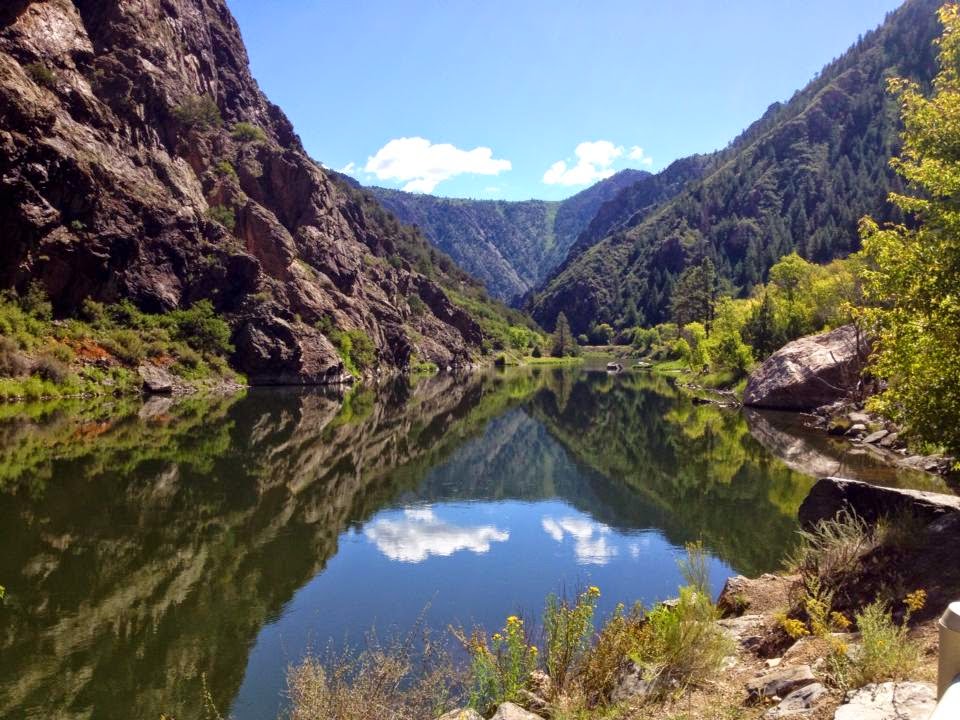 When you travel through so many states or countries in a short period of time, you find yourself asking, "Where am I now?".  When I think back on the sights that I've seen, the people I've met, and look at the pictures, I have to dig deep sometimes to remember exactly where I was at the time.  Then again, I AM getting old so maybe it's just me!  I don't really have that problem when I think of Colorado.  There is not one boring drive in Colorado!  Maybe if you are driving on the interstate but I wouldn't know as I find most interstates pretty boring.  Seeing as I was primarily driving the highways, it was a slow trek for me through this state.  I couldn't help but appreciate the beauty and snap picture after picture. 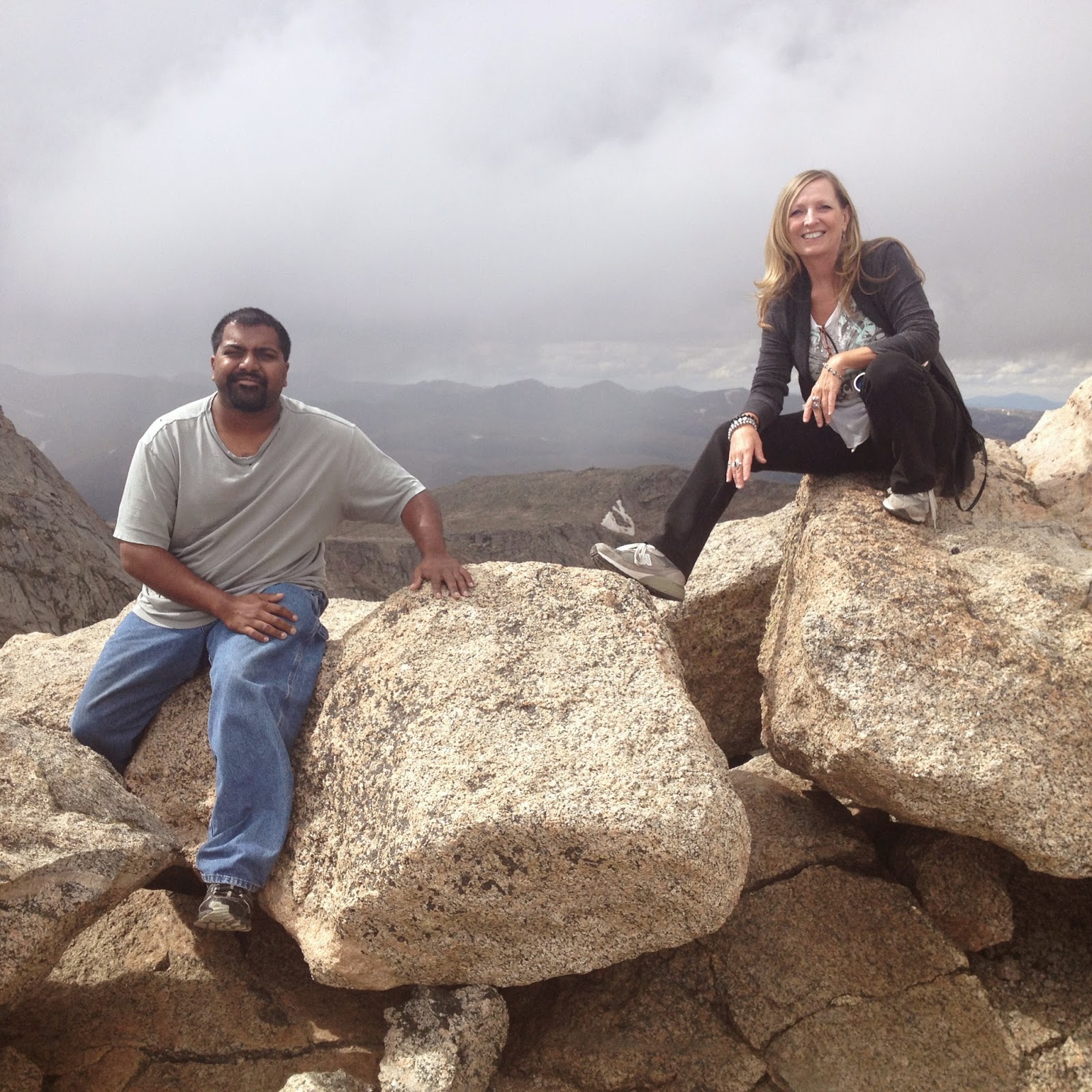 Unlike my travels so far this year, I started out spending several days in a large city, Denver.  My nephew, a trucker, notified me that his truck was in the shop and he was stuck in a hotel there.  Ben is a fun, positive person to be around and I was headed that way anyway so it was perfect timing (though I feel for his loss of wages that week!).

Once I arrived, unloaded, and got Lillie settled in the hotel room, Ben and I went in search of a friend of mine's pizzeria, Enzo's End Pizzeria, for dinner.  I met my friend, Charlie, in China...well, initially on Couchsurfing.  I had posted in one of the groups that I wanted to climb Mt Huashan and was anyone else interested.  He was!  So we experienced an incredible 9 hour adventure in China on one of the most dangerous mountains to hike in the world!  It was wonderful to see him in his element in Denver!  I recommend you pay Charlie a visit at his restaurant as the pizza was delicious!! 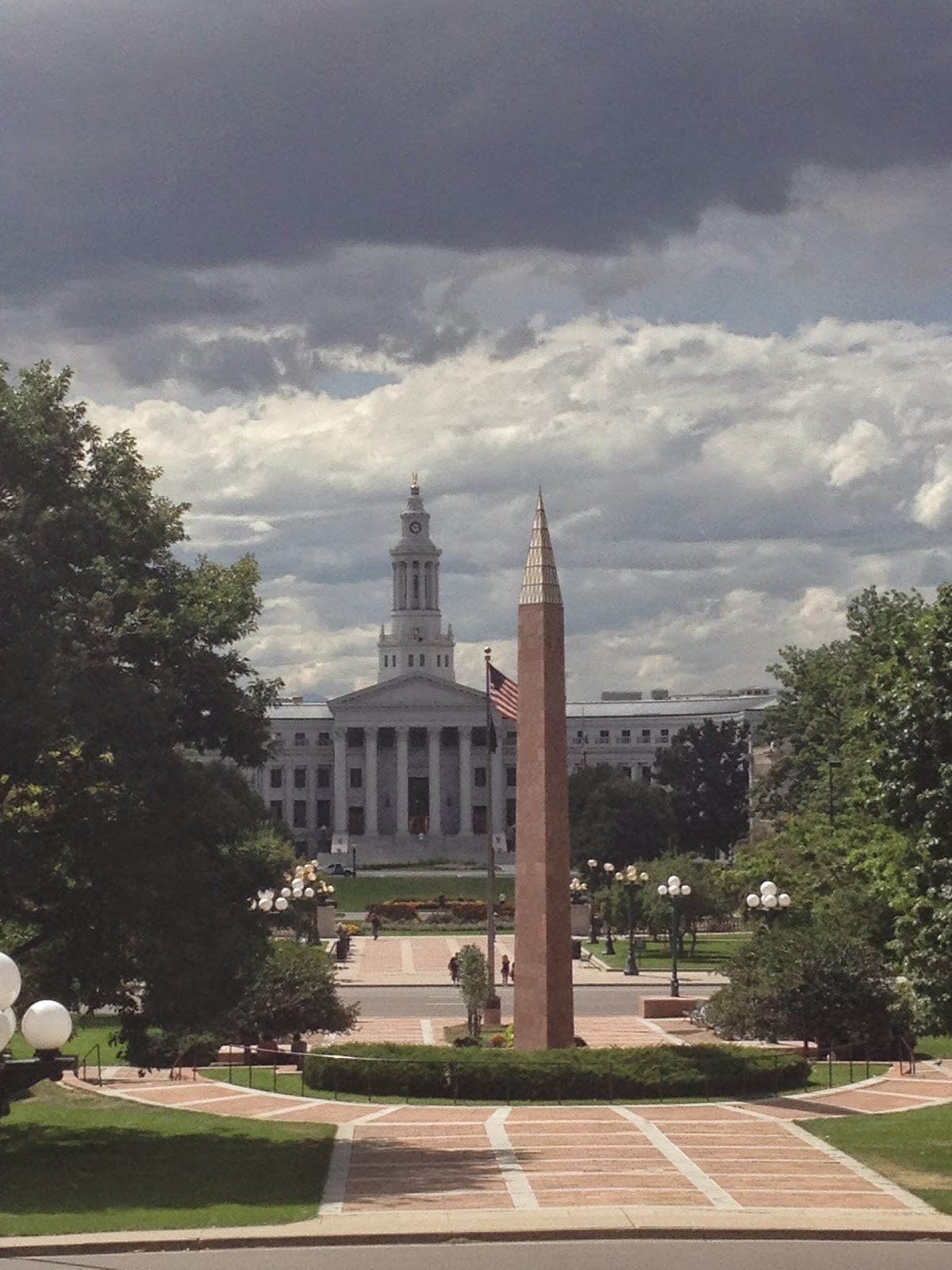 Other than spending some time in the shop getting my passenger window repaired, Ben and I enjoyed getting out to Tavern Downtown for drinks and
dancing (ladies drank for free), a tour of the Capital building, wandering and 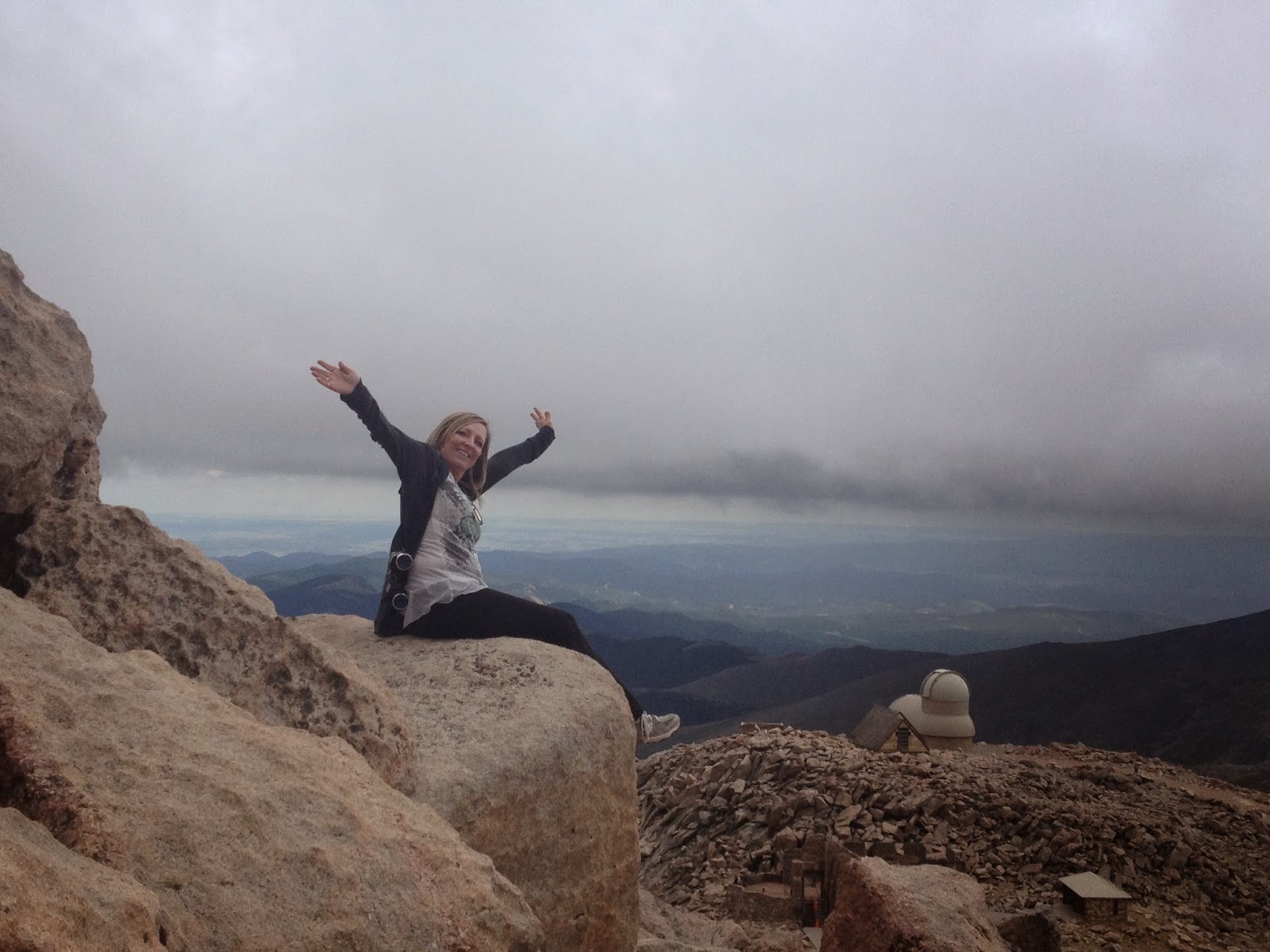 dining in downtown Denver, driving up Mount Evans (and doing a little bit of hiking at the top), and gambling in Black Hawk.  We experienced weather ranging from extreme heat to snow, sleet, and rain. Once his truck was repaired, I headed west to Parachute to enjoy the hospitality of a friend of mine from my school days in Rome, Italy. 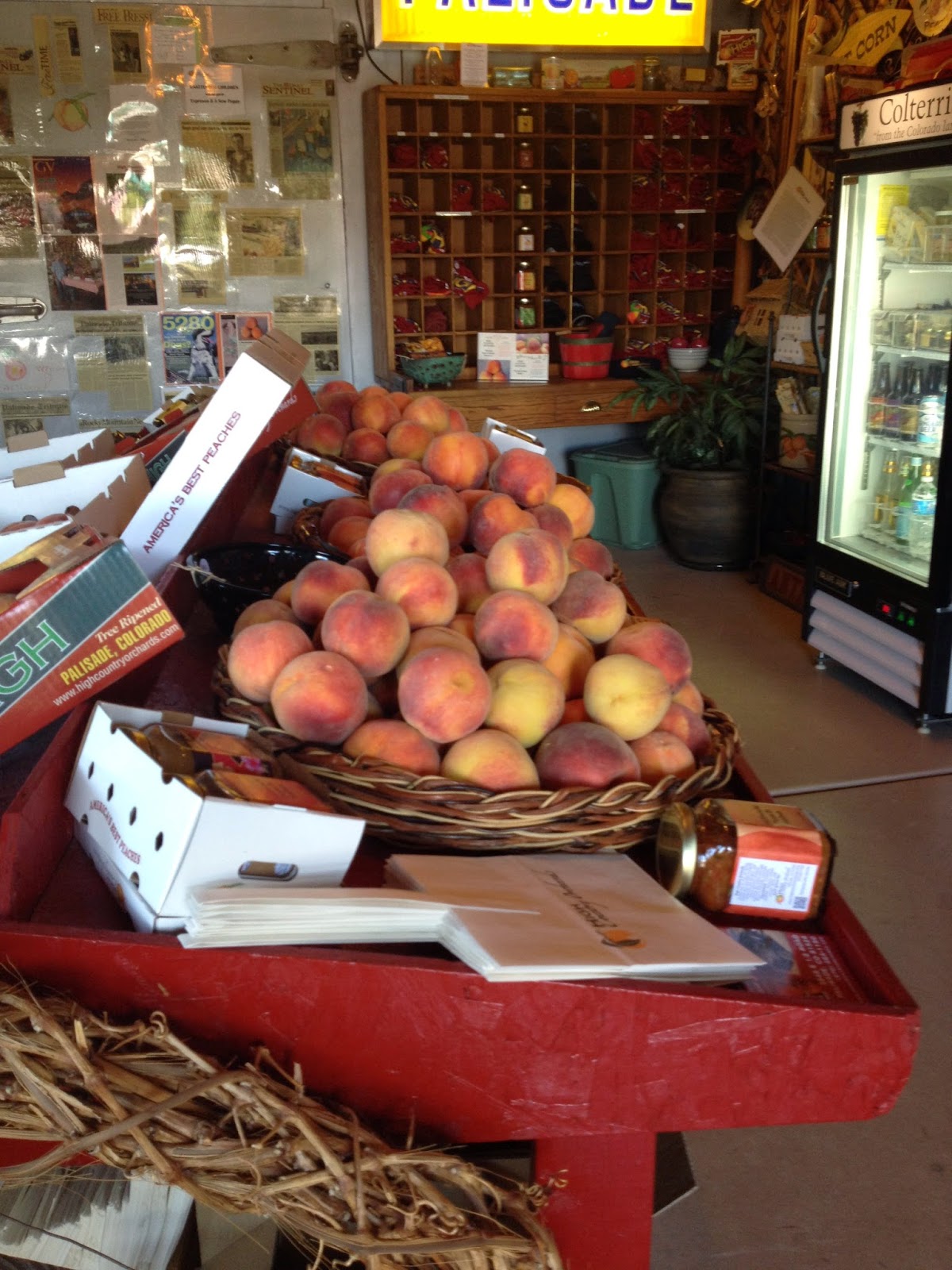 I spent a little over a week in Parachute.  It is a great jumping off point for ski resort cities, wineries, hiking, off road driving, rock climbing, and photo opportunities.  I, of course, hopped on Palisades Fruit and Wine Byway first.  This trail winds along the Colorado River to peach orchards, lavender gardens, and vineyards where you're invited to taste for free. Next I wandered Aspen, took the ski lift up Aspen Mountain and hiked, drove up to see Maroon Bells (but it was raining so my view was limited to say the least), and enjoyed a nice Italian dinner in Glenwood Springs on my way back to Parachute.  On another day, I went to Colorado National Monument where I not only enjoyed the views but reveled in a healthy hike on Serpent's Trail.  Lillie patiently waited in the Jeep as it was cool weather.  I spent a day checking out ice caves and watching rock climbers in Rifle Falls State Park and took Lillie with me to visit the Falls themselves.  Thanks to my friend, Robert, I also ate very well!  My favorite restaurant (which we went to my first evening there and my last) was in Silt, CO at Miner's Claim Restaurant!  Not only was the food delicious and the atmosphere relaxed, the staff were friendly and accommodating as well.

One of the benefits of staying with friends is that they can inform you of things to see or do and places to go that you've never heard of before but are so happy to learn about!  Ouray, CO is one of those places.  Cradled by the San Juan Mountains, this small, river valley town is world renown for it's Ice Park (if you're an ice climber, this is the place to be during the winter).  Besides being the "Jeep Capital of the World", it is also called the "Switzerland of America".  Whatever you want to call it, it rocks!  I camped at 4J+1+1 RV Park and Campgrounds so I could just walk into town.  Jeeps were everywhere as they actually have "Jeep roads" for you to drive your own or rent one and drive (or hire a guide to drive you).  I considered it but didn't feel that my Jeep was sitting high enough up to avoid the rocks.  Also in Ouray, you will find sulfur-free hot springs but I'm more into activities than relaxation.  My activities in Ouray consisted of hiking the perimeter trail, driving some of the back roads, wandering around town, and visiting Box Canyon Falls (everyone should!). 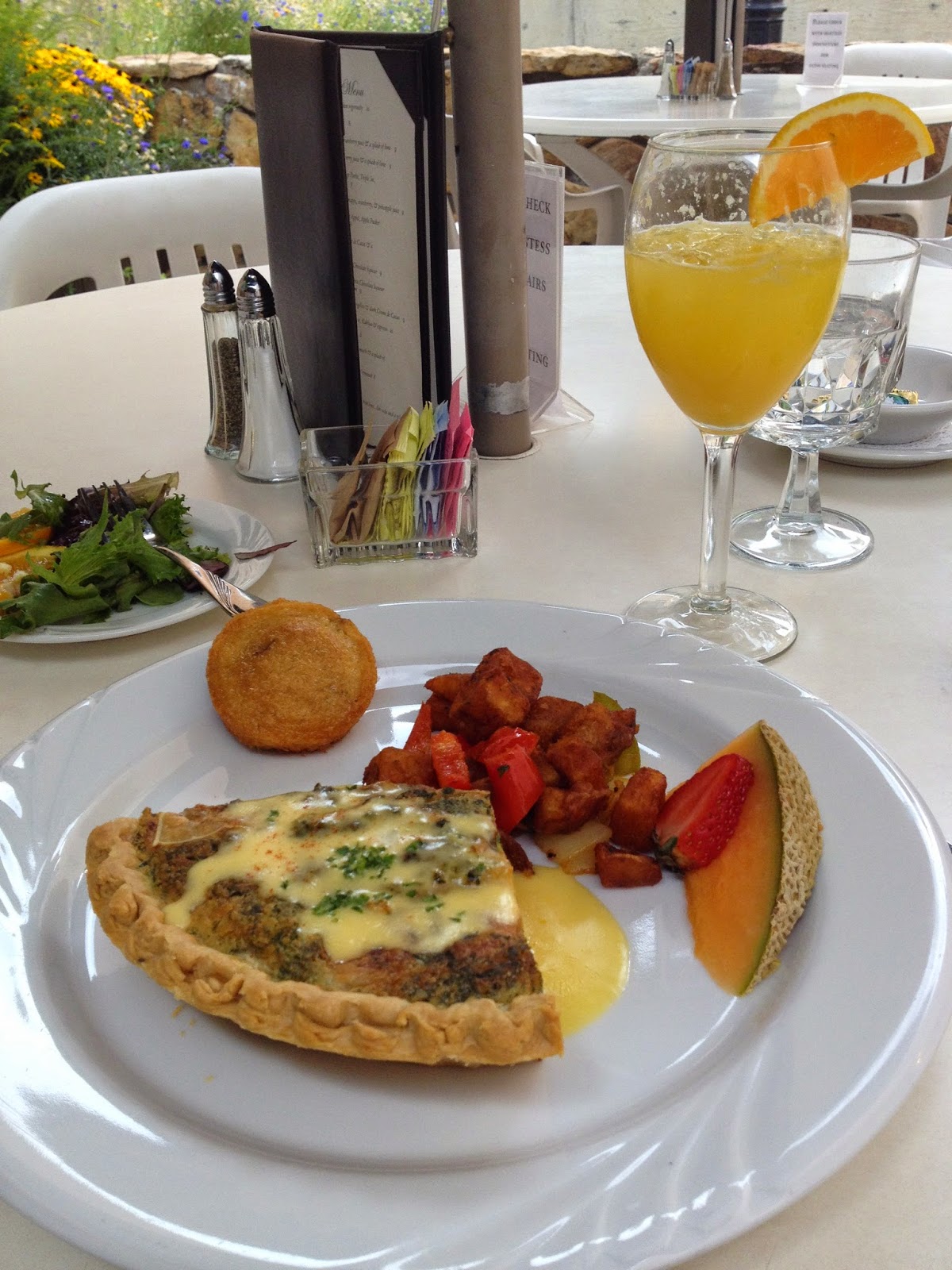 I ate out 3 times while in Ouray, twice at the same restaurant because it was so good!  That would be Bon Ton Restaurant.  That's right!  Who else is going to romance me?  Not only is the restaurant very romantic indoors but on their outdoor patio as well.  That is where I had my first meal there...Sunday brunch!!  It included free champagne or mimosas!  The meal itself was delicious and presentation was exquisite.  The surroundings, service, and food made me feel like a wealthy woman enjoying just one more expensive meal at an expensive restaurant but the prices weren't that at all.  This tent camper was a very happy camper indeed!  So of course I returned for dinner my last night in Ouray.

Rolling out of Bon Ton had me rolling to visit the surrounding towns of Telluride, Ridgway, and historic Silverton.  Traveling to Silverton is a pure treat as you have to drive the Million Dollar Highway (which was also my route south when I left Ouray to Durango and west).  The winding, two lane mountain road with sheer drop-offs might lead some people to choose an alternate route.  I'm not one of those people!  Amazing 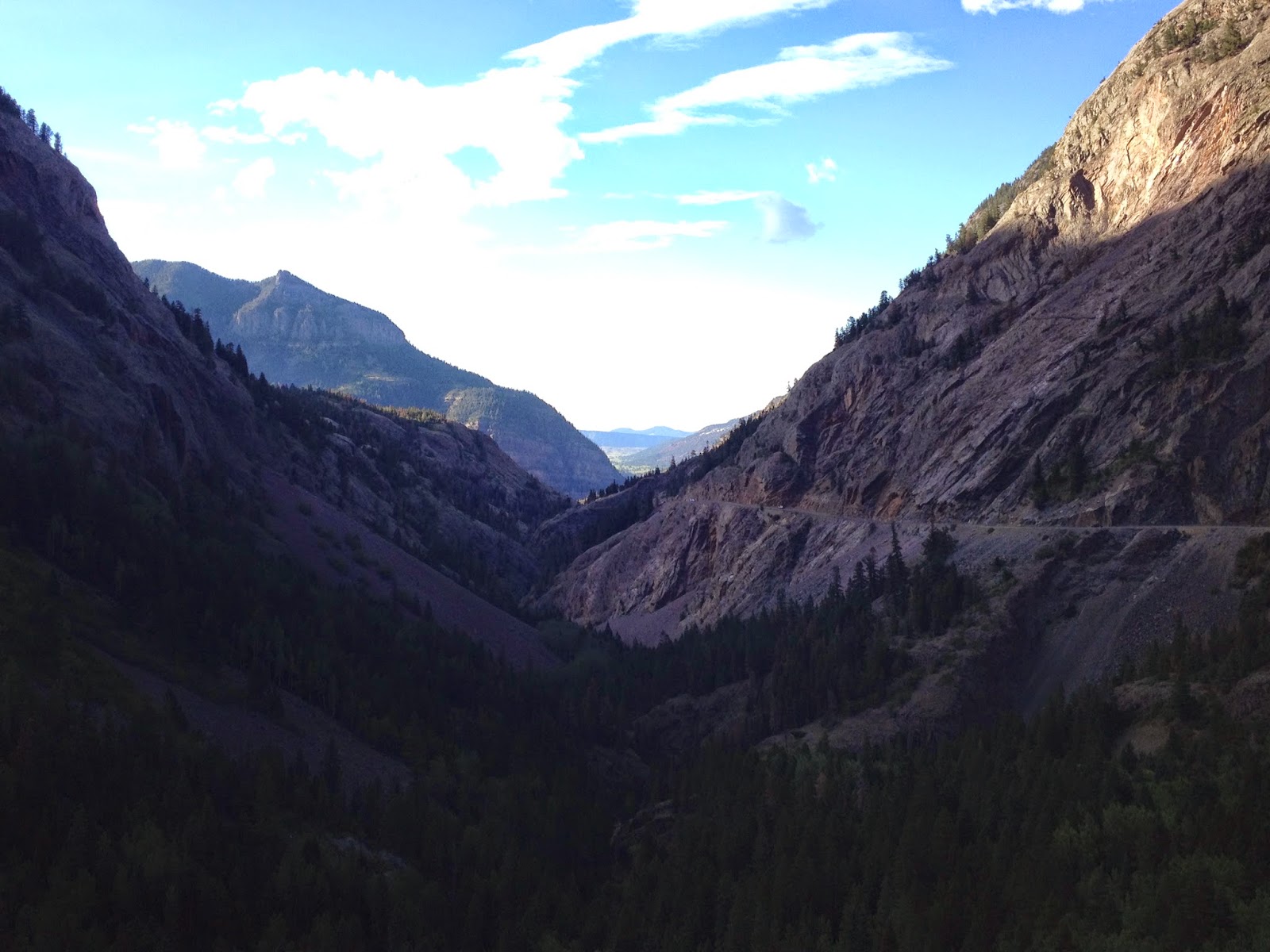 views and ghost mining towns are the reward for testing your driving skills.  After a slow drive through Silverton, I turned around and drove those fear inducing roads again.  The sheer quantity of photos that I took are a little ridiculous, even for me! 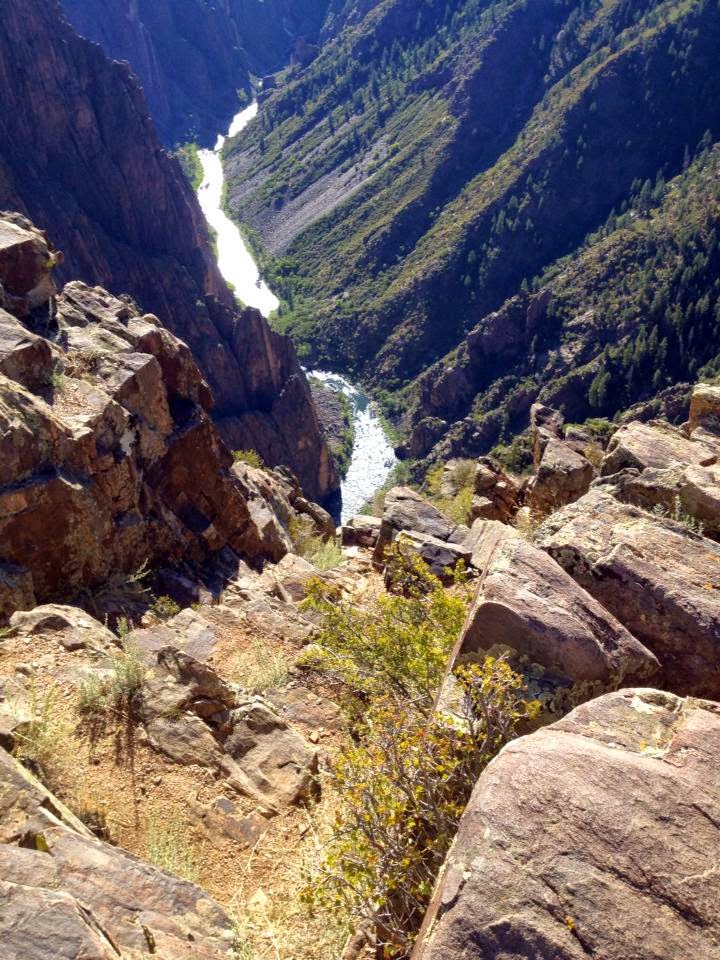 Before leaving this amazing area of Colorado, I took the opportunity to visit the Black Canyon of Gunnison National Park which has been on my bucket list since last year.  Quite the exercise program!  If I had not had Lillie, I would have hiked down into the Canyon (there are several different trails varying in difficulty) and back up.  As it was, I still got a great workout!  There are 13 points of varying distances (from 100 yards to over 1700 yards) to stop and hike out for the canyon views.  I skipped Devil's Point, Cedar Point, and Warner Point (the longest).  Nor did I make the drive to the North Rim.  I did, however, drive the extremely steep, switchback road with a 16 percent grade to the East Portal.
It was well worth it for the views!  The Gunnison River was gorgeous and the outdoor exhibits explaining the Gunnison Tunnel and Dam were very informative.  If you continue driving until you arrive at a dead end,  you are at Crystal Dam which is another architectural feat.  Along the drive, you most certainly will pass fishermen casting their lines into the fast flowing river.

Once past Durango on my journey to Utah and Arizona, I made one more detour...Mesa Verde National Park.  I had no idea it would take me most of the day!  I didn't pay for any of the tours yet I was still there 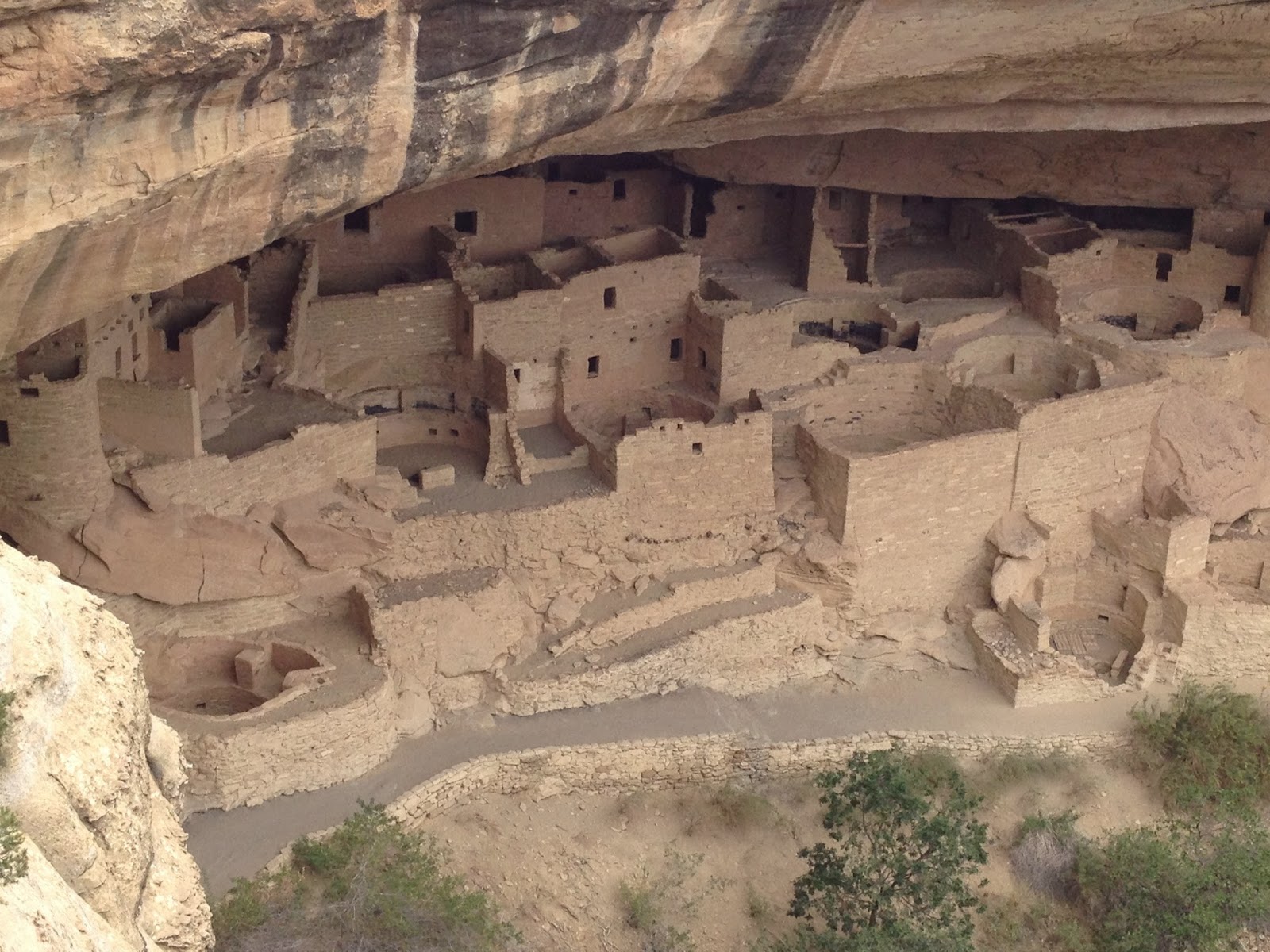 for hours driving, hiking out to views, and taking photographs of how ancestral man used to live.  I recommend this park to everyone as it really is an eye opener on man's ingenuity and physical endurance and strength. 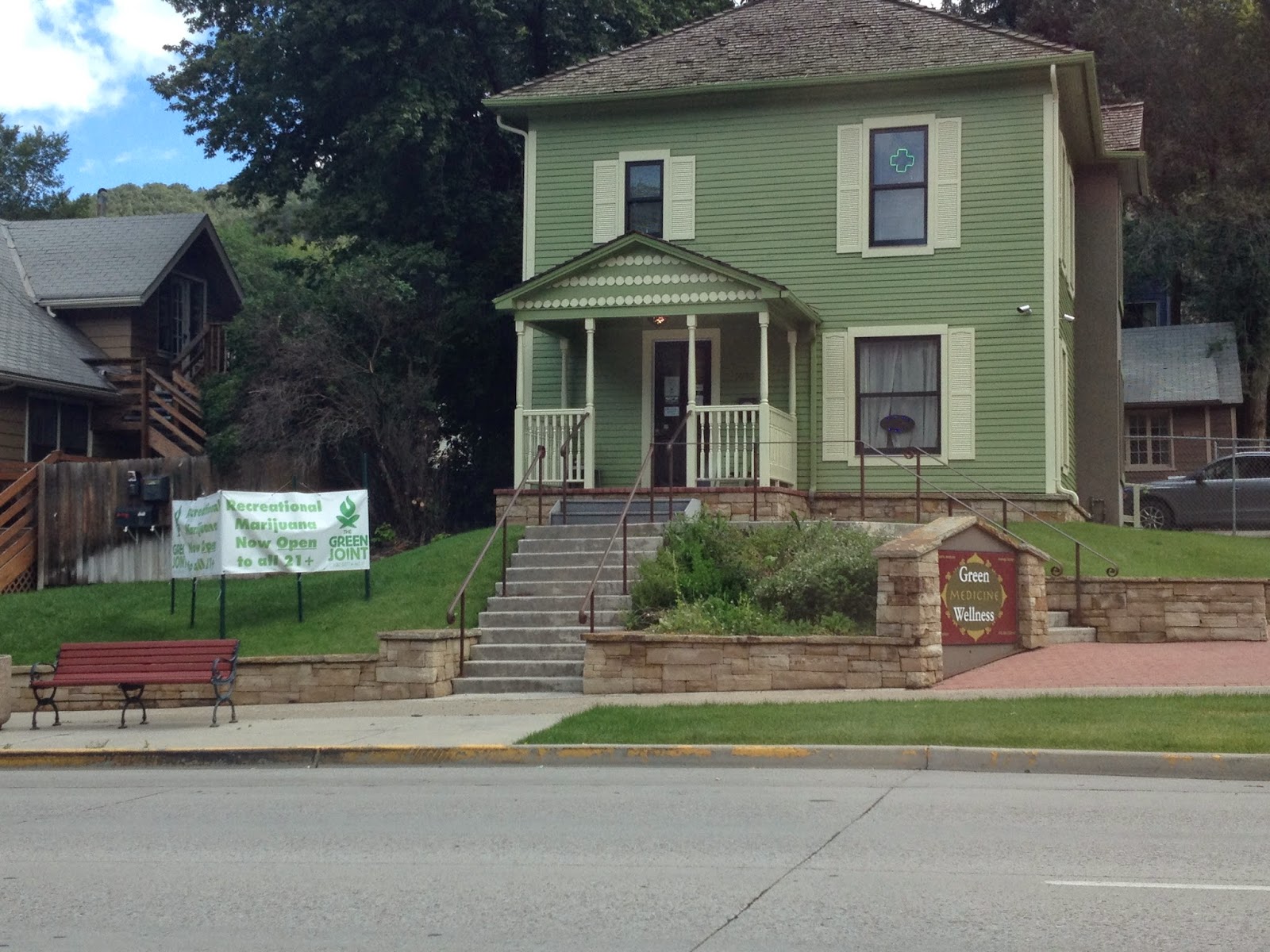 Yes, I am in love with Colorado!  No, I do not like cold weather!  So you'll find me there again in the spring or fall unless someone wants to put me up in a nice ski resort.  I'll meet you in the bar when you're done skiing!!  As for "high"...though marijuana is now sold legally in Colorado, my only highs were altitude and happiness! 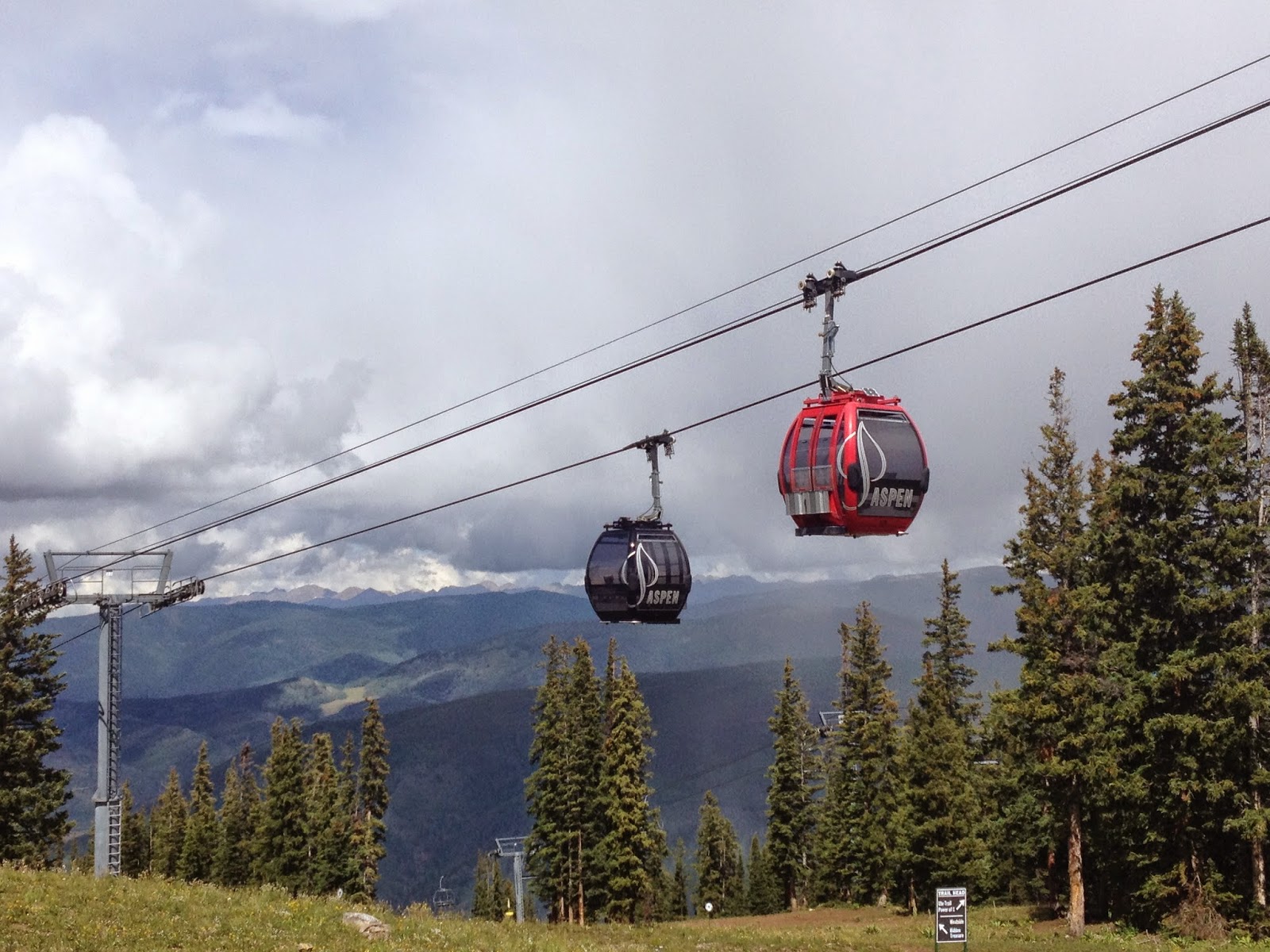