Hiking My Own Hike

I love to hike.  It is my favorite form of exercise as well as therapy.  Hiking introduced me to deeper introspection and an expectation of endurance that I've not put on myself in any other area.

I completed a few amazing hikes overseas just a few years ago but I was in the best shape of my life!


In 2011, I returned to the Amalfi Coast in Italy specifically so I could hike the Path of the Gods from Bomerano to Positano.  It's an amazingly beautiful path with incredible views of the coast!  Not difficult but pure
beauty!

Then in 2012, there were 2 hikes I did in China.  One was "the most dangerous hike in the world", Mount Huashan.  Not only was clinging to the cliff face (called the "Plankwalk In The Sky" and nearly 5,000 feet in the air) a feat for the nerves but it especially is after hiking the thousands 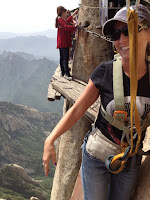 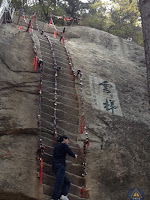 of steep steps carved into the mountain by the insane monks!!  Fatigue and fear make your entire being quake!  Nine hours is how long it took start to finish and I wasn't going slowly!  However, I did have to back track as I missed the temple where the Plankwalk was on the first pass.  The second major hike in China was the MuTienYu section of the Great Wall of China.  My friends, not being hikers themselves,  weren't up to hiking the entire wall as I was, so I pretty much ran most of the Wall as I hated the idea of them having to wait for me. Still, that one took me four hours and, as in all of these hikes, views were amazing but unlike them, the history was humbling!

I had not done a challenging hike in the US until this year...well, with the exception of Angel's Landing in Zion National Park, Utah in 2011 (see top photo)!!  I am woefully out of shape after road tripping for 2 years though!!  The first one was near Julian, California.  I don't even remember how I found out about it...probably a little blurb in one of the many tourist magazines and pamphlets that I picked up along the way.  Three Sisters Falls is the most challenging hike I've ever done.  It is only a 4 mile hike (2 in and 2 out) but the out part is all uphill!  Along this hike, I used every single muscle in my body!  Luckily, it wasn't an overly hot day and I met some folks along the trail to help me make it back!! 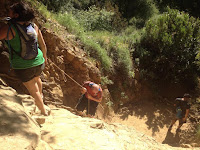 The trail starts at a gradual descent but turns steep then you're rappelling down via 2 ropes tied to trees.  As you continue, you boulder hop, rock climb, and finally reach the waterfalls.  They weren't much as there was a drought going on but pretty just the same.  As it was all downhill, I wanted more so I climbed and rappelled up the existing ropes to make it to the top of the waterfalls.  Go me!!  Uh huh.  Then it was time to head back.  The folks I'd met were taking advantage of the pool of water at the base of the falls so I tried to follow markers for a more difficult trail back.  I only saw markers...no real trail!!  So I headed back to the folks and by that time they were ready to go as well.  Together we helped each other stay on trail.  Once I arrived back at the original 2 ropes, my real workout began!!

I managed to climb with the aide of rope number 1 but couldn't swing over to reach rope number 2!  So I 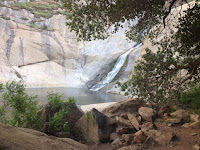 clawed my way up the dirt hill on hands and knees to a point where I could grasp a small bush.  However, I was on the wrong side to reach the trail!!  One of the young men behind me climbed to where he was anchored by bushes on the correct side and held his hand across for me.  I literally leaped for it and he just barely caught me and pulled me over!  I honestly don't know if I would have made it back without that one moment of help!!  After that, I thought, "NOW I'm almost there!".  Right!!  I hiked on and on...a seeming eternity...uphill!  I doubted making it back to my Jeep many times in that measly 4 hour hike but I pushed on!!  I'd only brought 2 bottles of water and had emptied them.  If you do this trail, bring PLENTY of water for the return hike up!!  Seeing my Jeep was a moment of deepest relief that I won't ever forget!! 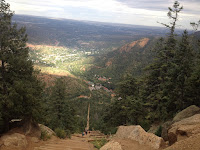 My most recent hike, the Manitou Incline Trail, was a completely different but extremely challenging hike.  The trail consists of the ties from an old cable car that ran straight up the mountain in Manitou Springs, Colorado.  The grade is as steep as 68% in places, starts at 6,600 feet and climbs to 2,000 feet within a mile. For this Texan, that's a lot of altitude!!! About 2/3 of the way up, Barr Trail intersects with the Incline.  Just making it to that point, I had impressed myself.  I REALLY wanted to just take the trail down from there.  However, I push myself when I hike like no other time!  So I hiked on, sometimes on all fours!  I had about 5 lbs in the pack on my back (water and camera) which I don't recommend...but water was essential.  The weather was overcast with some light rain which was perfect for this climb!  Unlike any other 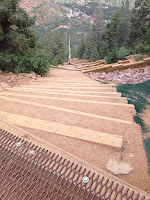 hike, I concentrated on my steps.  After a certain point, in order to continue on, I HAD to go slow!  So I would lead with my left leg, count 3 steps, stop, and then lead with the right leg.  Being out of shape and just stair climbing was killer.  I stopped to rest a lot to get my heart rate down.  So did many 20 something year olds! Olympians use this trail to train as does the military.  I made it to the top by sheer will and  I feel in good company!!  I wasn't confident in my legs ability to make it back down that steep incline so I hiked the 4 miles down the Barr Trail after reaching the top.  It took me 2 hours to make it to the top then an hour to hike the 4 miles down.  Oh, did I mention the awesome views??

These are the trails that I search out.  The ones that give me the satisfaction of accomplishment!  They make me reach deep!  All I need is my desire to conquer the difficult hike without need of extra equipment! LOL  Short but tough day hikes so Lillie isn't alone for too long.  My spirit swells and my energy multiplies and I'm in flight!! 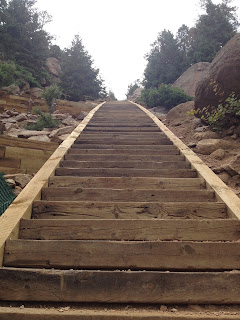 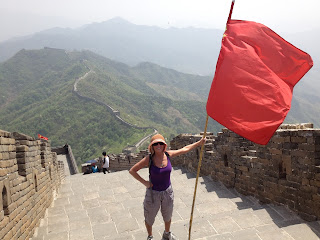 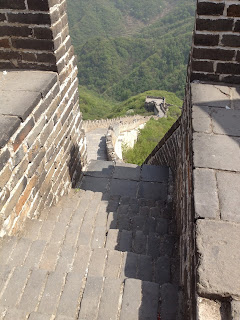