When I left Colorado, my destination was Kanab, UT on the border of Utah and Arizona.  I drove a lot longer than I had anticipated as I couldn't find a place to pitch my tent or a cheap motel.  I ended up in Page, AZ trying, along with many others, to get a hotel room for the night.  There was a caravan of sorts going hotel to hotel only to find they were all booked.  I drove up to yet another one, Quality Inn, not feeling hopeful but YES, they had 2 rooms! The rate was $115. Ugh. Thanks anyway. So I informed one of the couples I had run into at the other motels that there were 2 rooms available. They raced in and grabbed one of them. The other couple I had seen pulled up and the girl walked over to me and said, "This may sound a 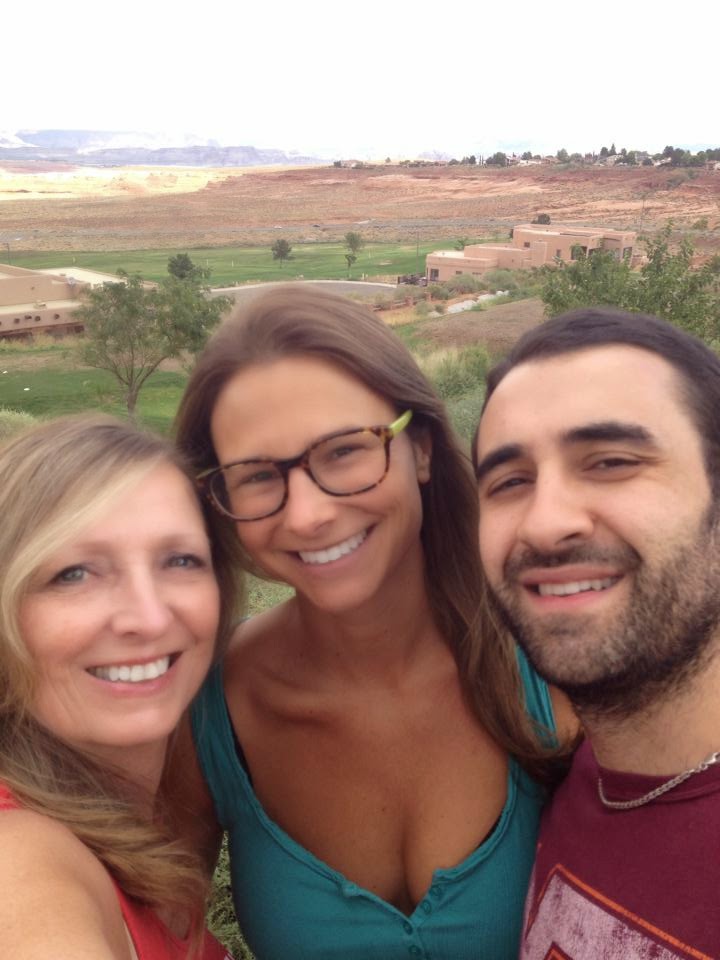 little odd but we're pretty sick of looking for a room! Any chance that IF we find one with 2 beds that you would want to share it and the cost with us?". It was midnight at that point.  I said, "Actually, they have a room available with 2 queen size beds. Why not?". Lacey is from Florida originally and Ivan is from Torino, Italy!! We enjoyed conversation and our experiences on the road. They met working in Washington DC (he's been stateside for 2 yrs) but are both unemployed and students now. They were moving to LA and her classes were starting the following Monday. Lillie passed out and was beyond happy to get out of the Jeep!! We were ALL happy to be in a hotel room!!  After breakfast the next morning, we went our separate ways. 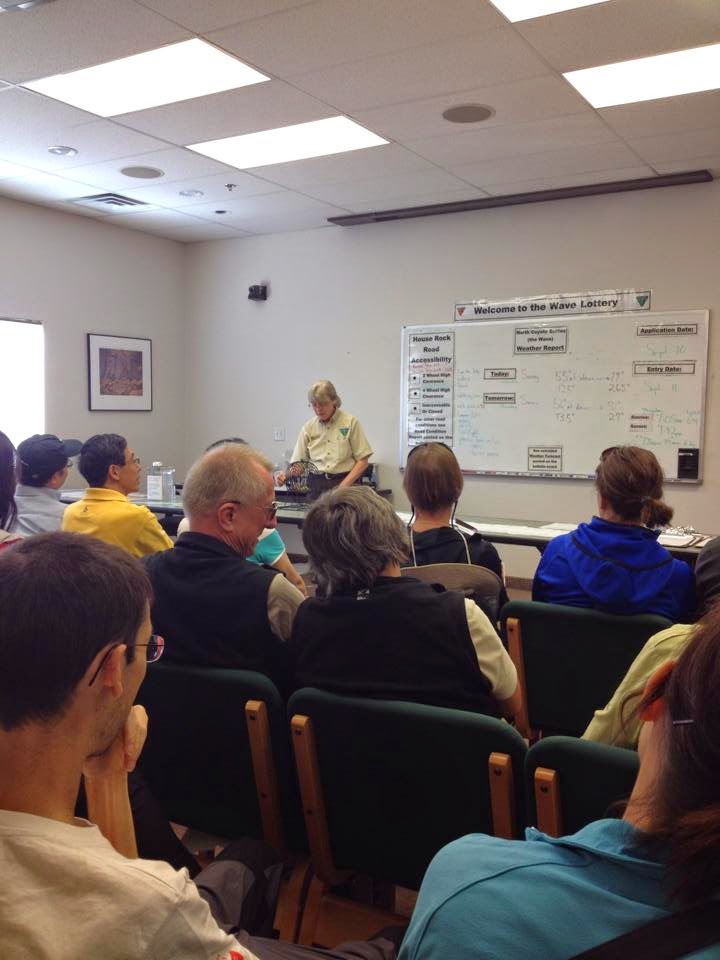 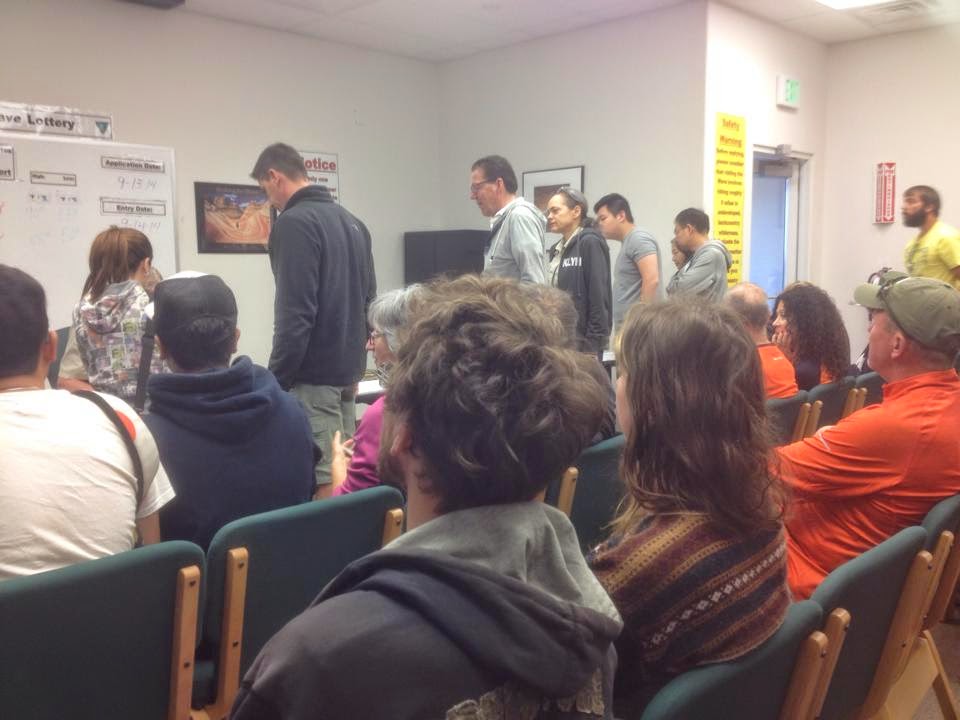 An hour or so later, I rolled into Kanab, UT where I checked in at the BLM (Bureau of Land Management) office and then set up camp just 2 doors down at Crazy Horse RV Park .  Why Kanab?  I wanted to win the lottery!  Not your typical lottery, though.  The Wave lottery!  The Wave is an incredibly peaceful and beautiful place to hike and take photographs with no other people stepping into your view.  How is that possible?  By allowing only 20 people per day to hike through it!  10 people are chosen via internet application and the other 10 from a walk in lottery at the BLM office in Kanab, UT.  A bingo sort of system is used every morning at 9AM and you have to be present.  After a beautiful full moon night, I arrived early on September 10, 2014 to throw my name into the proverbial hat.  It was a tiny room.  All of the seats were taken and people were lined down the wall!  Right before the drawing, we were informed that there were only 54 of us walk-ins vying for a permit that day.  ONLY??  Pretty much every nationality was represented and I was not a winner on day one.  So I wandered the surrounding vicinity, getting an idea of things to do in case I didn't win the next day or the next.  At the end of the day, I enjoyed dinner at Denny's Wigwam and Curio.  Honestly, the food wasn't great but the atmosphere was awesome and Lillie was more than welcome.


Day two, the number of walk-ins were double the day before so it was also a non-winner day for me....and so it went for me for another few days.  Loser!  No Wave for this chick!  Over the 4 days we tried to get lucky, Lillie and I enjoyed a drive to and through Bryce Canyon National Park, hiked a bit of Rainbow Rim in Kaibab National Forest (on the way to the north entrance of the Grand Canyon), I climbed a forest fire tower (Dry Park Lookout Tower) and met the Tower Guard (after a very scary climb!), we hiked through the Coral Pink Sand Dune State Park, we hiked a little bit of Buckskin Gulch, drove washed out desert road to visit the old Paria Movie set and we revisited the north rim of the Grand Canyon.

On my final day in the area, Lillie and I drove to the Vermillion Cliffs to visit a Facebook friend that I'd never met.  I was nervous as she had a young pit bull mix which is a breed that has never mixed well with Lillie!  As calm and laid back as she is, when it comes to other dogs, she prefers they just leave her alone.  This or her age (therefore, weakness) seems to just tick them off.  Everyone of them (four) have attacked her completely unprovoked.  Well, after hours together enjoying what was a very good afternoon of my FB friend and I getting to know each other, her pup jumped Lillie out at Lees Ferry.  Long story short, I followed my friend for the 2 hours it took to drive to Page, AZ to an emergency vet (it was Sunday) at Page Animal Hospital.  The vet, Dr Roundtree (aka Dr Flipflops) was phenomenal!  He allowed us in to observe and help with stitching her up (I held her skin together while he stitched.  It sounds worse than it was).  Afterwards, my friend and I went to 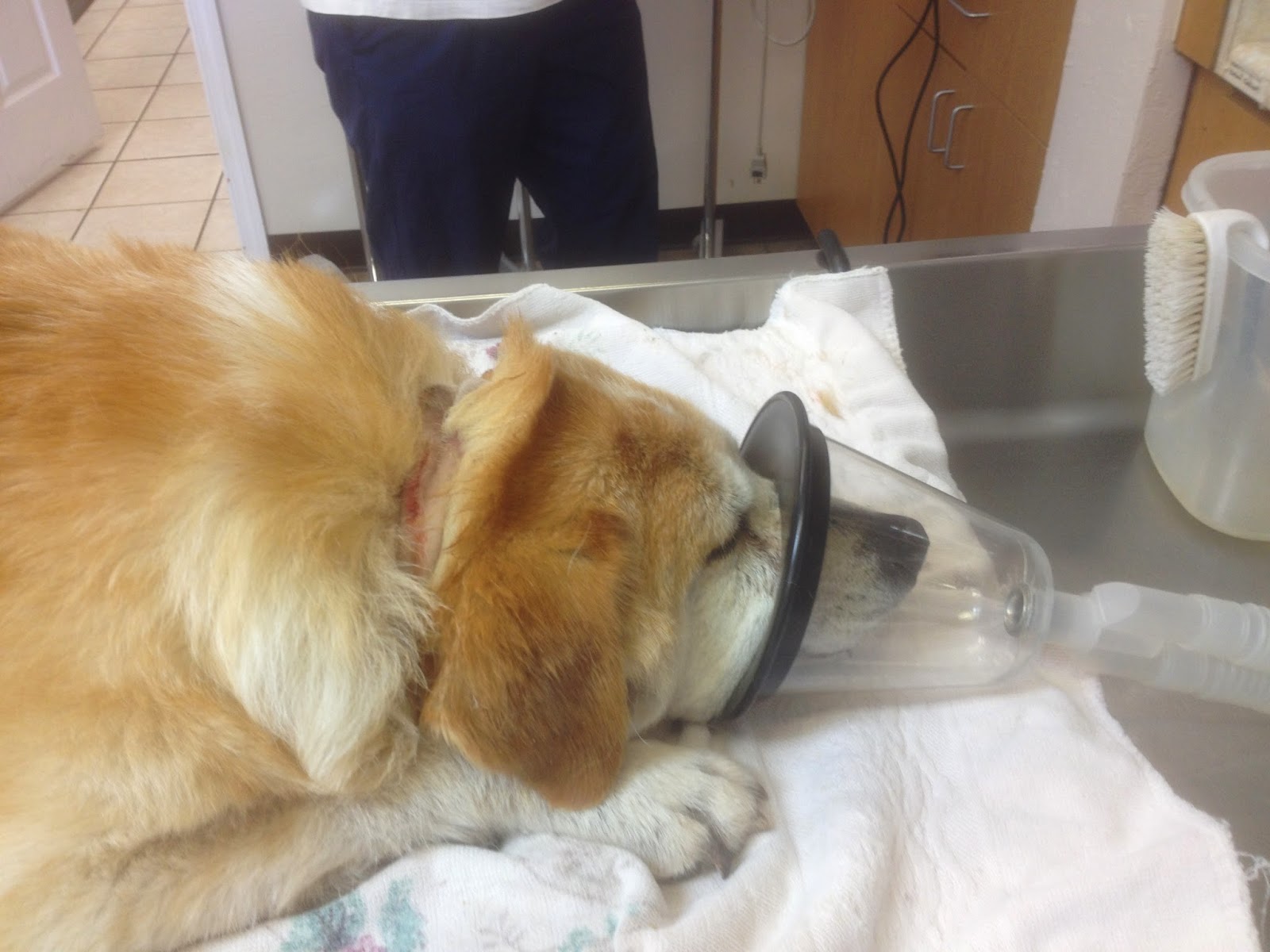 get some dinner but Lillie was too drugged to stand up, much less walk, even though the vet had given her a double dose of meds to counteract the sleeping meds.  My friend felt completely horrible about the entire episode, paid the vet bill in full, and said that she's going to seek some kind of canine behaviorist so that it hopefully won't happen again.

Back at camp, I arrived to find my tent moved and the park manager running over to explain.  A water pipe had burst and the flow went straight to my tent.  Luckily, he caught it before much got wet.  What a day!!  I re-setup my camp and spent most of the night worrying about Lillie still being dopey on the meds.  It was funny at first but then was concerning as she couldn't focus and would just stand in place watching the general direction of a person who had passed by.  Light drew her and, at one point, I had to retrieve her from the men's restroom!  By noon the next day, she was doing much better, though!  We were on the road early, GPS set to a long time friend's place in Phoenix. There is just so much to see and do at the AZ/UT border!  Make it a bucket list must!!