South Dakota isn't a destination that's ever been in my bucket list.  When I realized Mount Rushmore was there, I thought, "Someday.".  Well, someday arrived as I was so close in nearby Wyoming.  No time like the present! 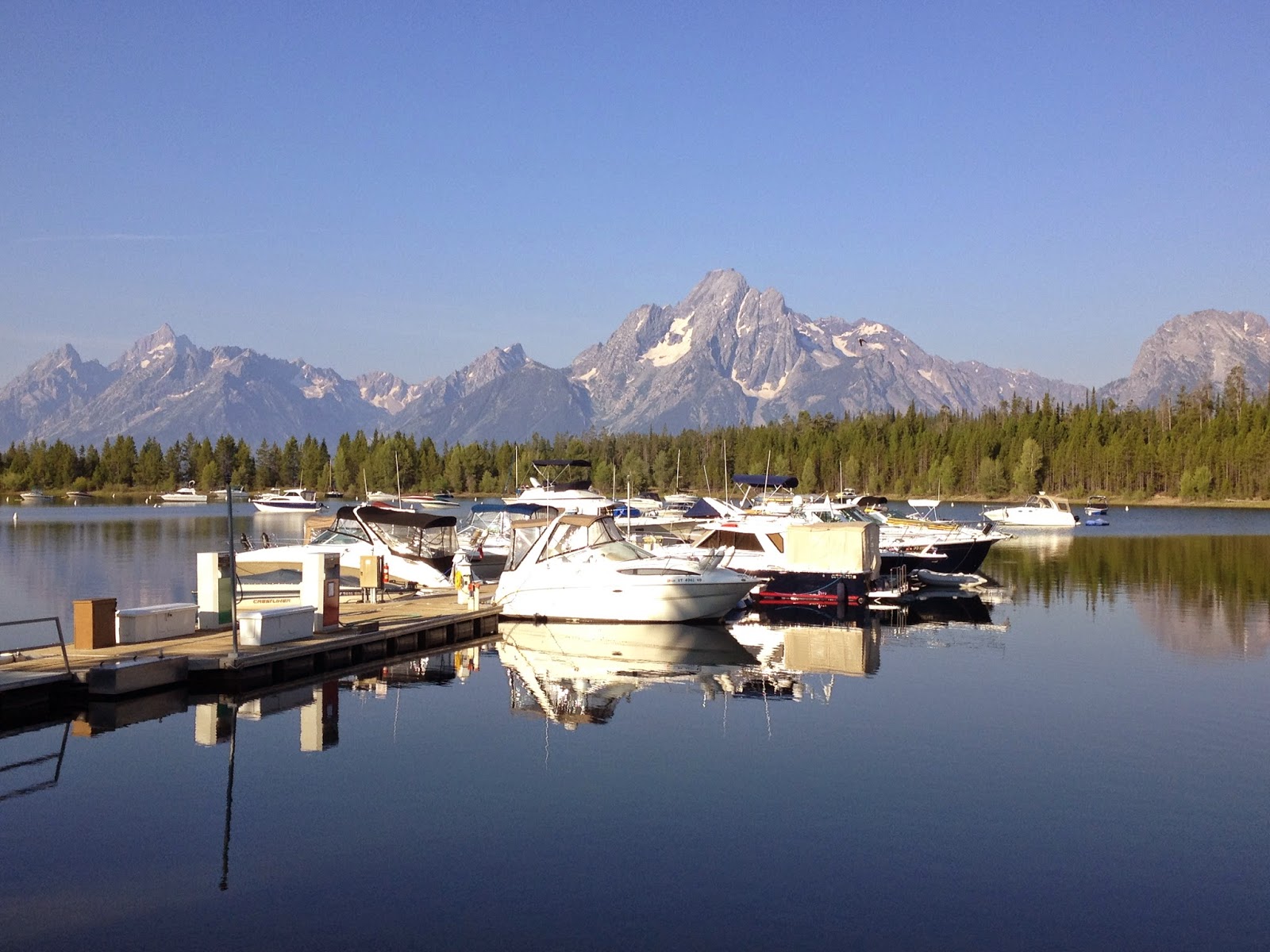 Before we get to that, I should first mention my last few days and nights in Wyoming.  Lillie and I arrived at Grand Tetons National Park at a decent hour but I was exhausted for some reason.  So setting up camp was my primary concern. By 9:30PM, I was sound asleep in one of the  nicer campgrounds in the national park.  I was awakened around 11:20PM by voices.  I laid there listening and heard about 5 people yelling back and forth, "Did you hear that?"..."Yes!  I heard someone scream for help then a baby crying!".  Oh crap!  Suddenly I had a pressing need to use the restroom but I 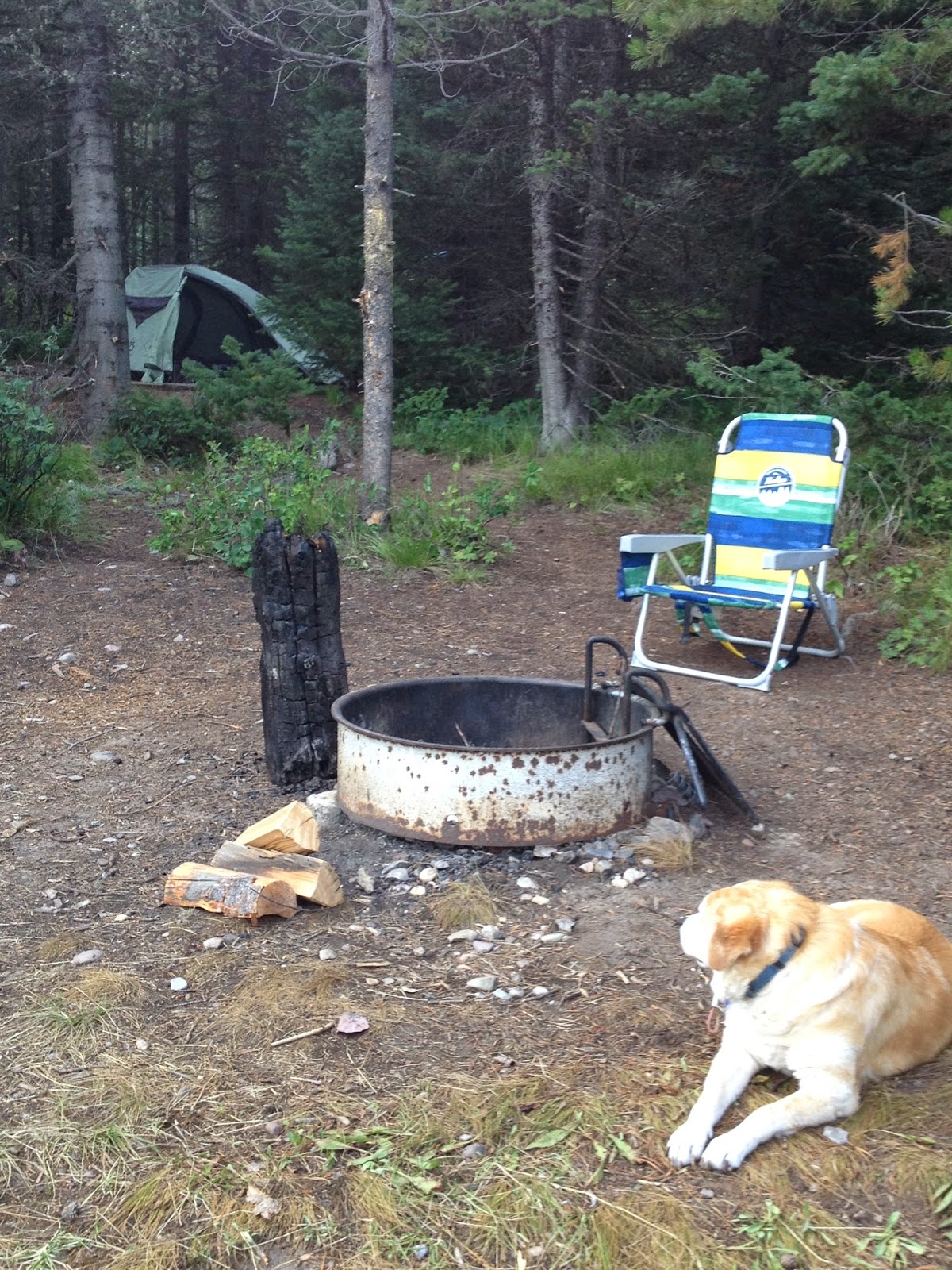 knew they were concerned about the scream because we were deep into grizzly country.  As I heard them all walking further away yelling, "Are you the one who screamed?  Whoever screamed, are you alright?", I had no choice but to emerge from my tent to walk what seemed like a mile to the restroom.  My headlamp barely seemed to penetrate the darkness and I continually checked behind and beside me for a possible grizzly on the hunt.  Obviously, I made it to the toilet and back to my tent in one piece and slept soundly the rest of the night.  I assume there were no grizzly attacks as I heard nothing else about the incident. 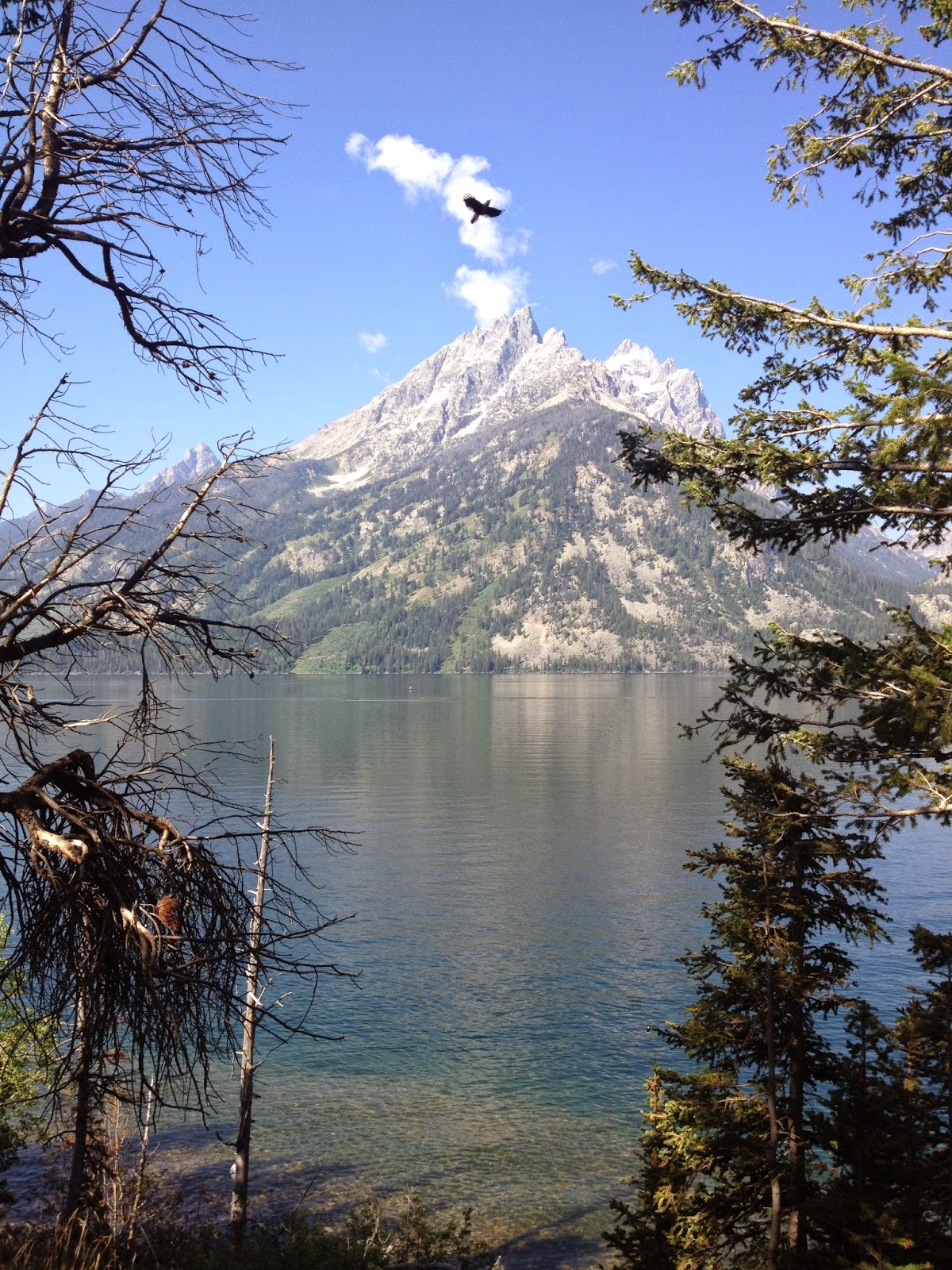 The Grand Tetons were majestic, of course!  I wished that I was able to hike what appeared to be some amazing trails but it was much too hot to leave Lillie waiting in the Jeep.  It didn't take long to see all I was able to see (without hiking) throughout the park and we soon found ourselves in Jacksonhole, WY.  We had a nice lunch at the Merry Piglets Mexican Grill and moved on.

As we drove on country roads heading west, we had no destination in mind for the night but I did have high hopes of a shower!  As I drive, I tend to multitask and Facebooking is my multitasking preference.  As I read through my notifications, I found that I had received an offer from a recently added friend of a friend to stay with her in Virginia City, MT.  What a cute, quirky little western town (completely touristic but cute!).  My new friend, Jackie, is a like minded traveler and is heading to China for a visit next month so we had plenty to talk about.  I got my shower, drank too much, and was able to post a blog (the next morning as too much drink proved to be an issue!). 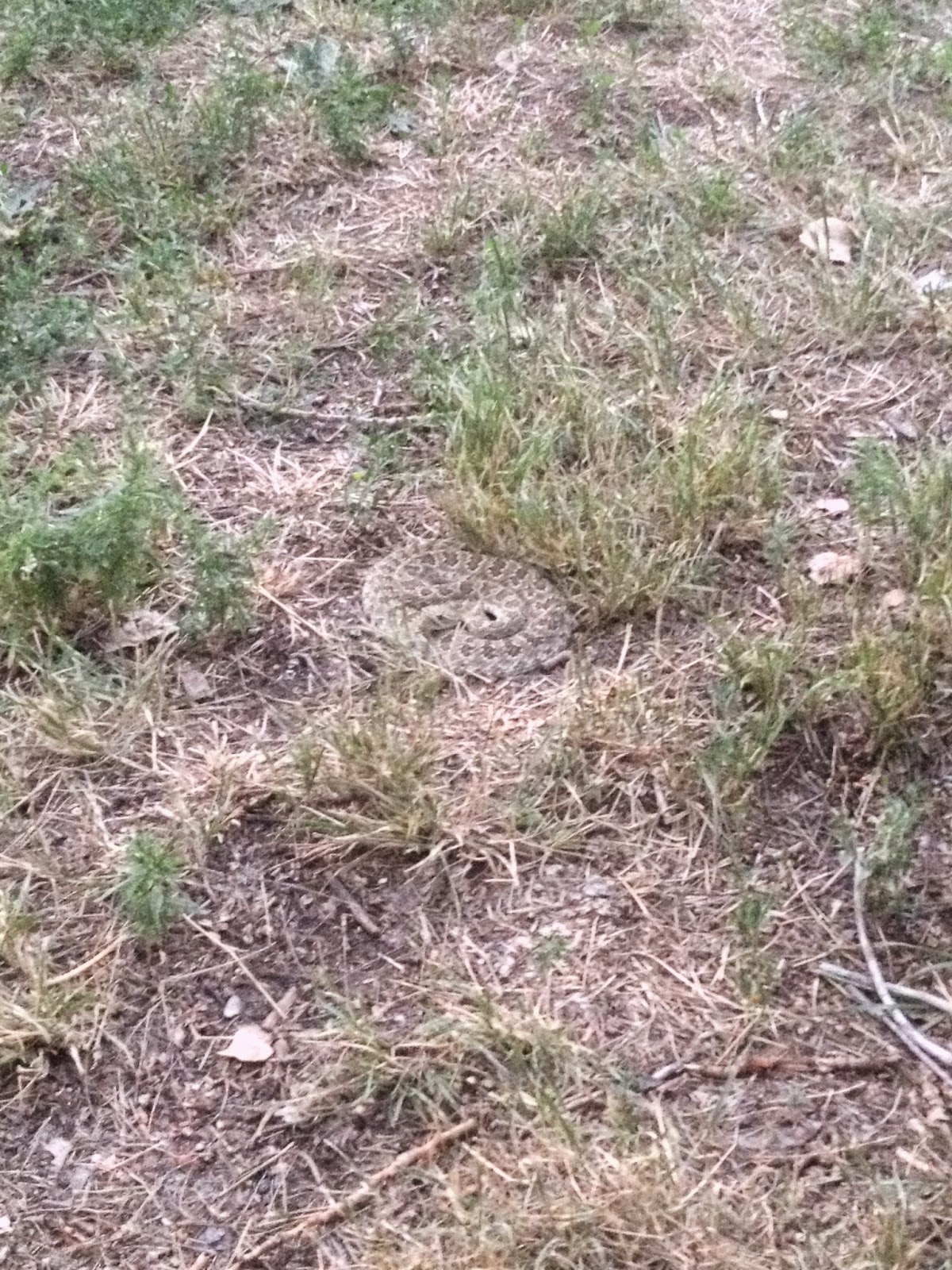 The following day, a nice drive from Virginia City brought me to Boysen State Park.  After setting up, I took off my hiking boots, donned my flip flops and took Lillie for a walk.  Checking out the list of wildlife that I might need to look out for, I was thrilled to see that I wouldn't need my bear spray!!  After a while, the need for fuel for my campfire had me wandering around picking up small twigs. Suddenly, I found myself leaping through the air with a screech as I saw my foot about to land on a prairie rattlesnake!!  The snake was curled up for a good nap, apparently, and simply watched me as I took pictures of it and just looked at it in awe!  Cardio done for the day!!  Whew!  I kept Lillie well away from it and ended up enjoying the rest of my night with a Chicago couple drinking wine and watching the super moon rise above the mountain.  I left Wyoming early the next morning but not before checking the snake's prior location.  He was thankfully gone. 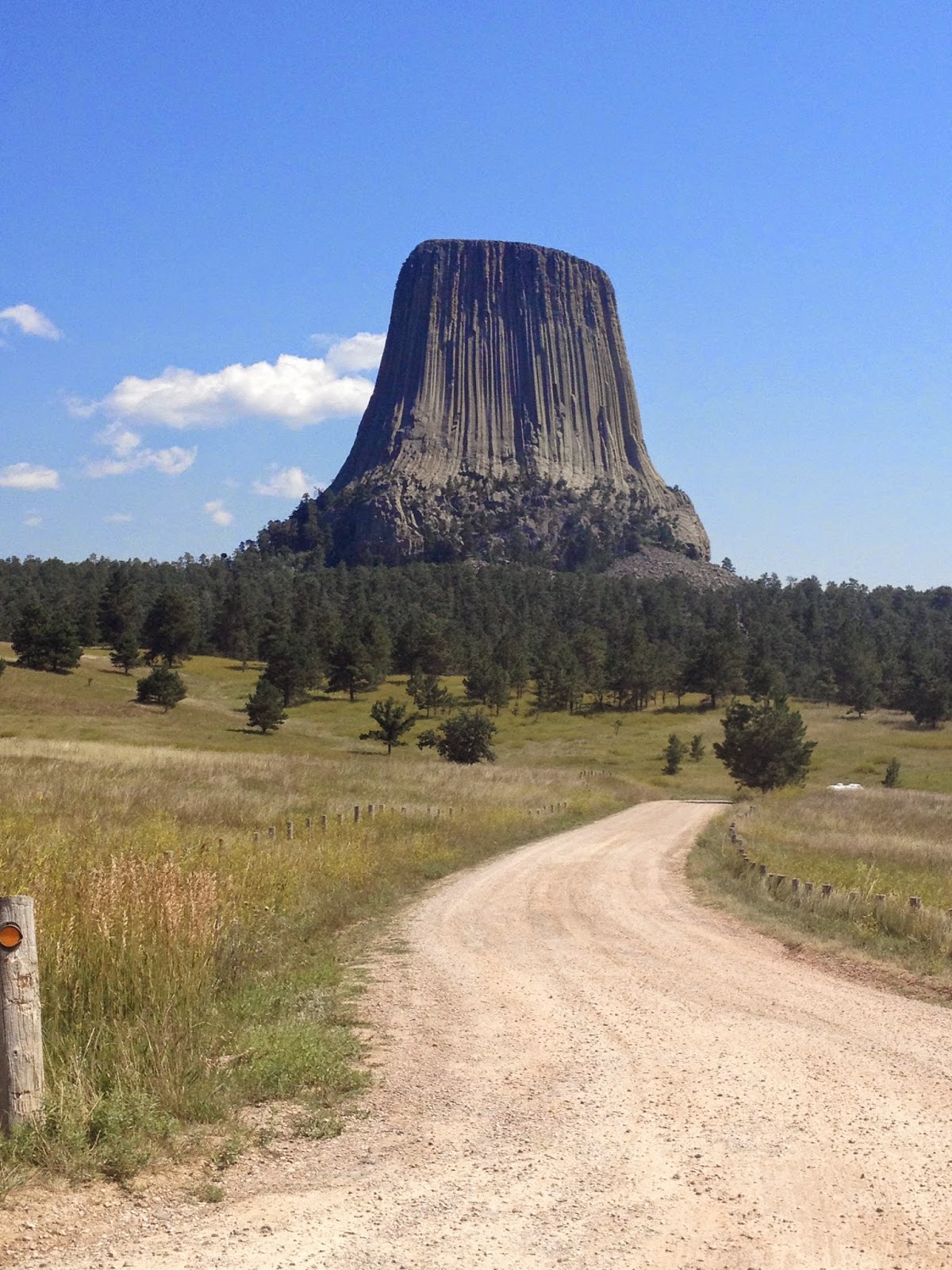 The last thing I randomly did in Wyoming was to veer off to see Devil's Tower.  There was a trail around the tower that turned out to be much longer than I'd anticipated.  While Lillie waited in the Jeep under a tree, I raced around Devil's Tower taking pictures.  It's quite a site to see, as I'm sure I was! LOL

I fell in love with the Black Hills of South Dakota! Soaked in old west history, laden with monumental monuments, and small towns with anything but small minded people. The Black Hills sucked me into their forested mountains and gentle wildlife and had me counting my blessings!  I drove into Deadwood, SD unprepared for the wild west that this town exudes.  Apparently, Wild Bill Hickok was shot in the back while playing poker there.  That explains the many gambling locations in this tiny town!  I passed through and up the mountain at a slow pace as deer crossed the highway at random.  At the top of that mountain, I found a fabulous campsite!  Hidden Valley Campground had the cleanest, nicest showers and restrooms I've seen to date!  The prices were excellent and included (at request) electricity and wifi!!  I initially paid only for 2 nights but ended up extending my stay for a week.  I was entertained daily by a doe and her 2 young ones eating their way across the unused tent sites.

Deadwood was an excellent jumping off point in any direction for South Dakota vistas, history, adventure, and monuments!  I completely recommend the Black Hills area for family vacations!  I can't even begin to complete the list of family activities and destinations available here!!  It varied from zip-lining, drive through safari, cavern exploration, hiking, off roading, horseback riding, water sports, wine and brew tasting, trout fishing, off-road adventure, theme parks, and other distinct activities. Highway 385 and 16 lead me wherever I needed to go. 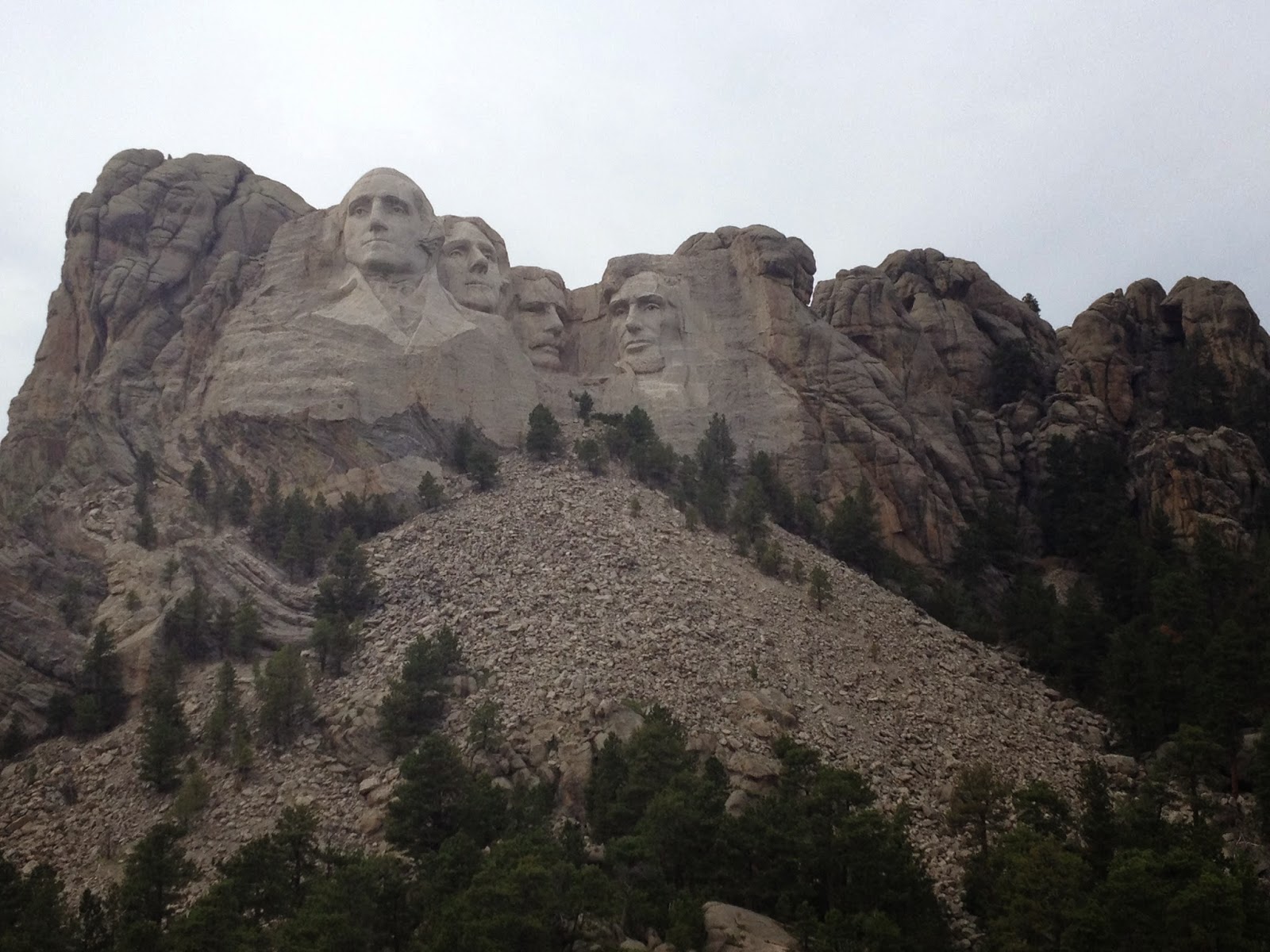 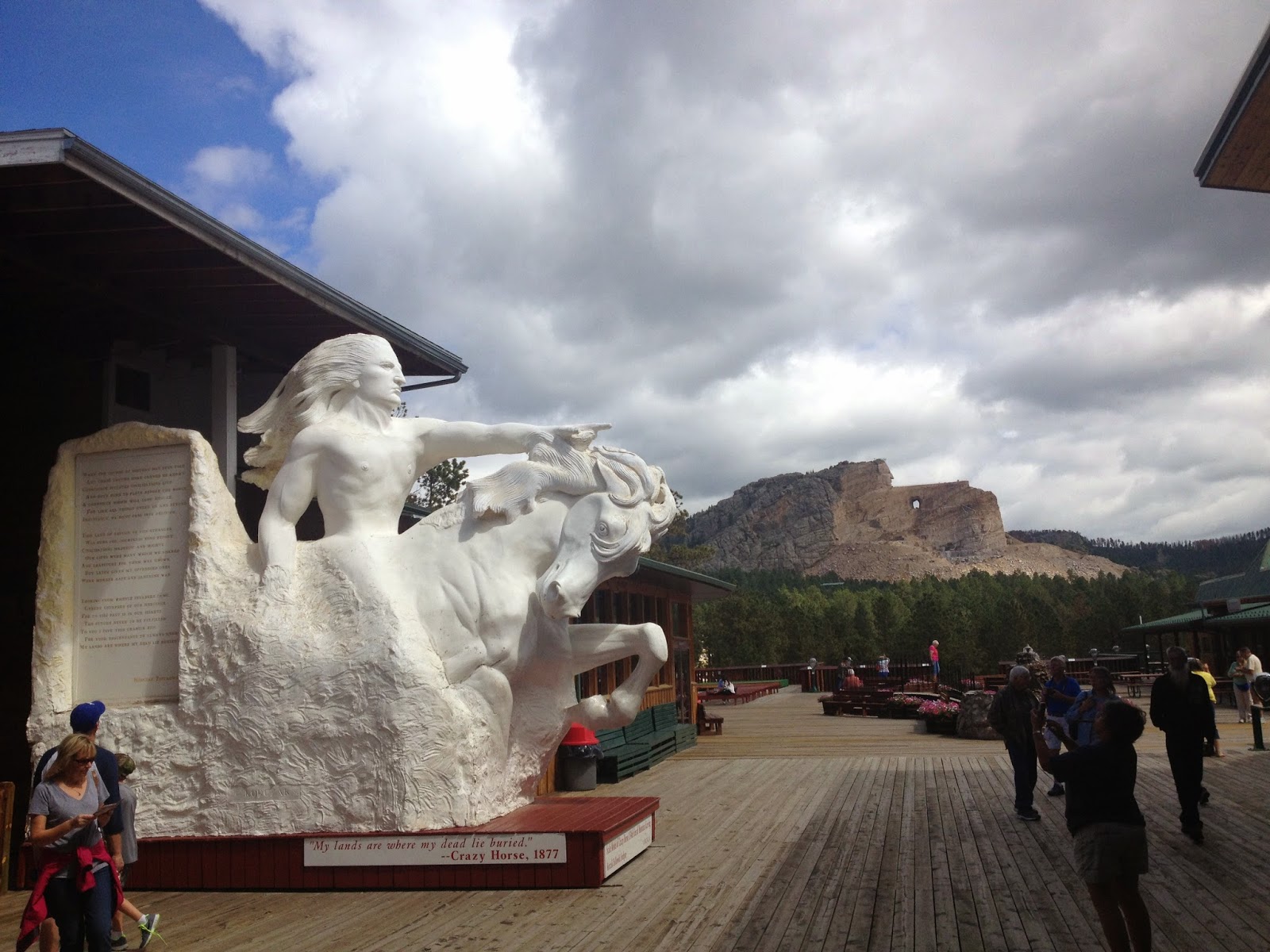 Mount Rushmore was an incredible sight to see.  Getting closer and closer to our presidential giants carved out of a mountain was an experience that I can't properly relate.  Thinking of the men who worked on this project, hanging by cables and working with primitive tools (by today's standards), is beyond comprehension.  After witnessing this amazing feat of human determination, driving just 17 more miles down the road takes you to another.  In an effort to show that the American Indians had great men too, the mountain sculpting of the Crazy Horse Memorial began.  Once finished, it will be the world's largest mountain carving!  The finished product will be amazing but in which lifetime it will be finished is anyone's guess. 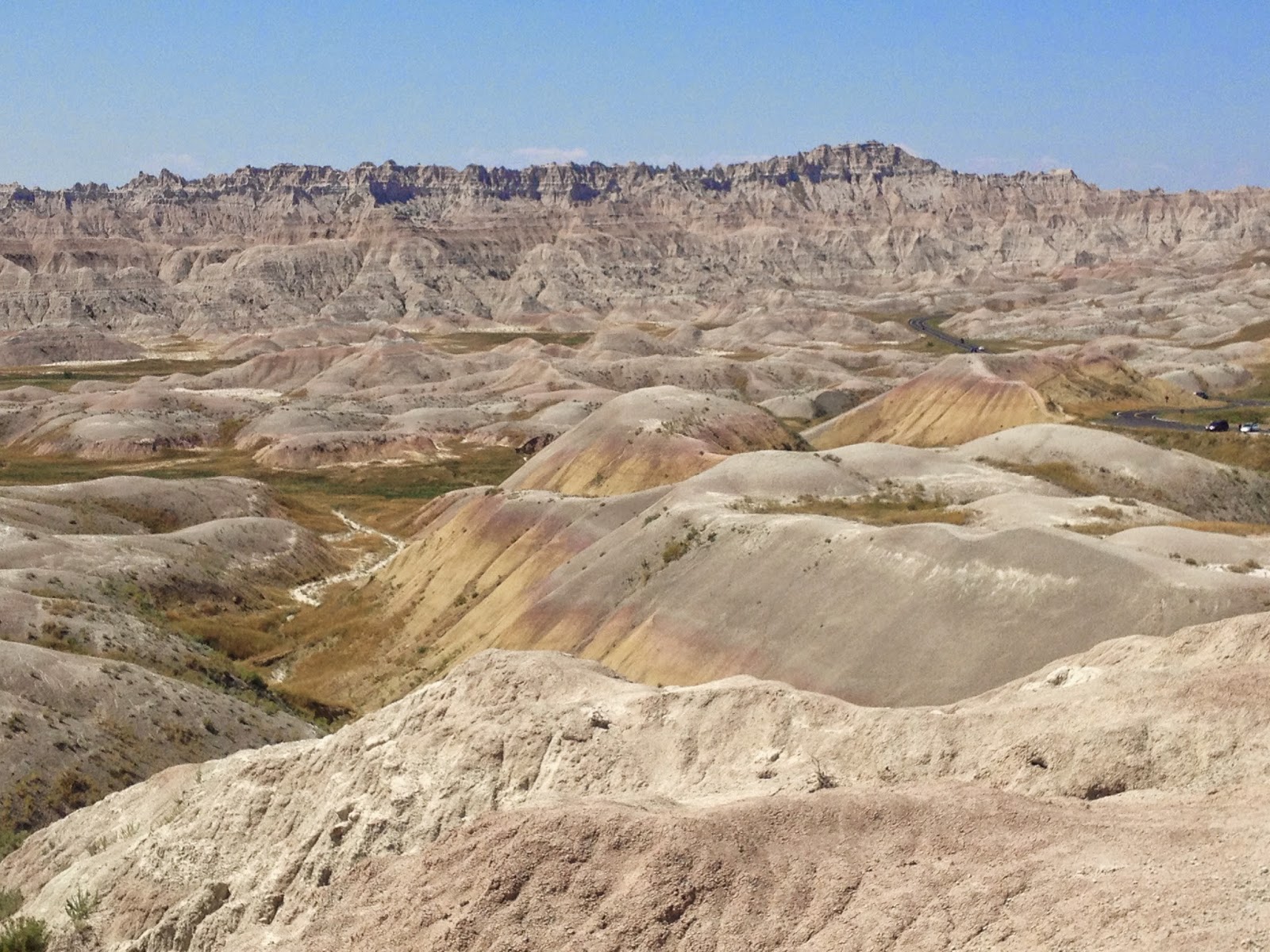 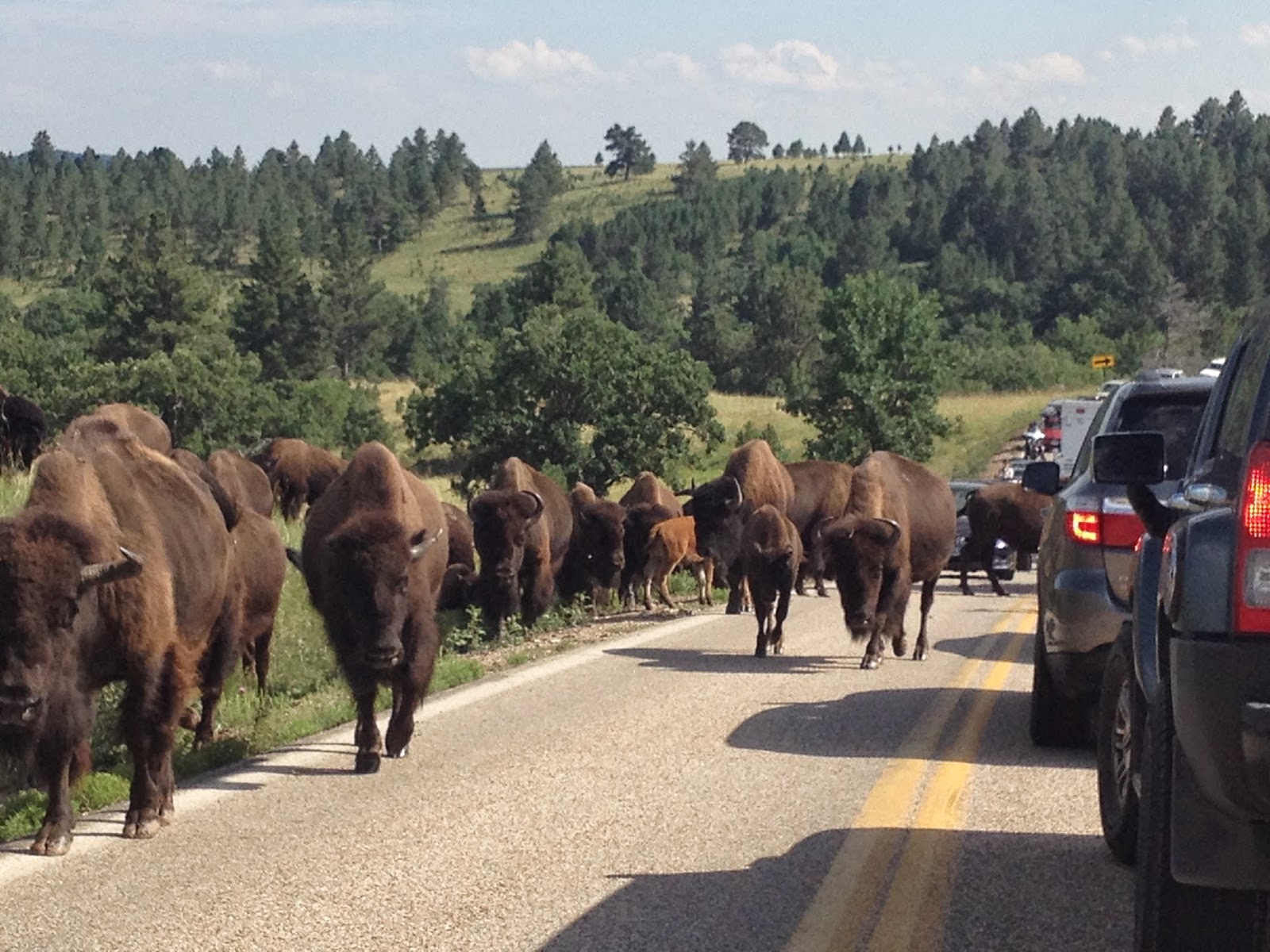 I was thrilled to see that bison roam freely in the Black Hills of South Dakota as well as the Badlands, which was my next stop.  By the way, don't miss driving Iron Mountain Road (Hwy 16A) not only for the scenery but also for the wildlife (bison, big horn sheep, and antelope).  Be sure to head there from Custer State Park for a surprise view.  There was plenty of wildlife to be found in the Badlands, as well.  Including the very amusing prairie dogs.  In Badlands National Park, you can just imagine seeing American Indians hunting.  The landscape seems unforgiving but it truly is not.  A must see for anyone going to South Dakota.
Obviously, there was plenty to see and do in eastern South Dakota!  I'll finish this blog on the off roading and hike I did up to the top of Custer Peak.  I just wanted a good hike but found a fire lookout tower at the peak.  The drive and hike were all uphill and I chickened out on driving the final mile or so.  I got my cardio that day for sure!  As I had just descended from the tower, I ran into a man who, as it turned out, was the tower guard.  His name was John and he invited me up to the very top of the tower (ie. his office) and I was
able to see the tremendous views that were his for 12 hours or more a day.  He invited me to stay and visit (it really must be a very lonely job) but Lillie was nervously waiting for me in the Jeep.  I thanked him and hurried down the mountain.